Magnificent Trees in Avatar Grove That You Must See to Believe

Magnificent Trees in Avatar Grove That You Must See to Believe

The west coast of Vancouver Island is deservedly famous for being a place of wild biodiversity, unique environments, and wonders of nature that have truly stood the test of time.

One of several things that contribute to this is old-growth forests, some of which are around 1,000 years old and contain some of the tallest trees in the world.

The lands surrounding Port Renfrew are often referred to as the ‘Tall Trees Capital of Canada,’ and the stunning, ancient, and mysterious Avatar Grove is an excellent example of why.

Here, you can find both what has been dubbed ‘Canada’s Gnarliest Tree,’ and the poignant Big Lonely Doug. 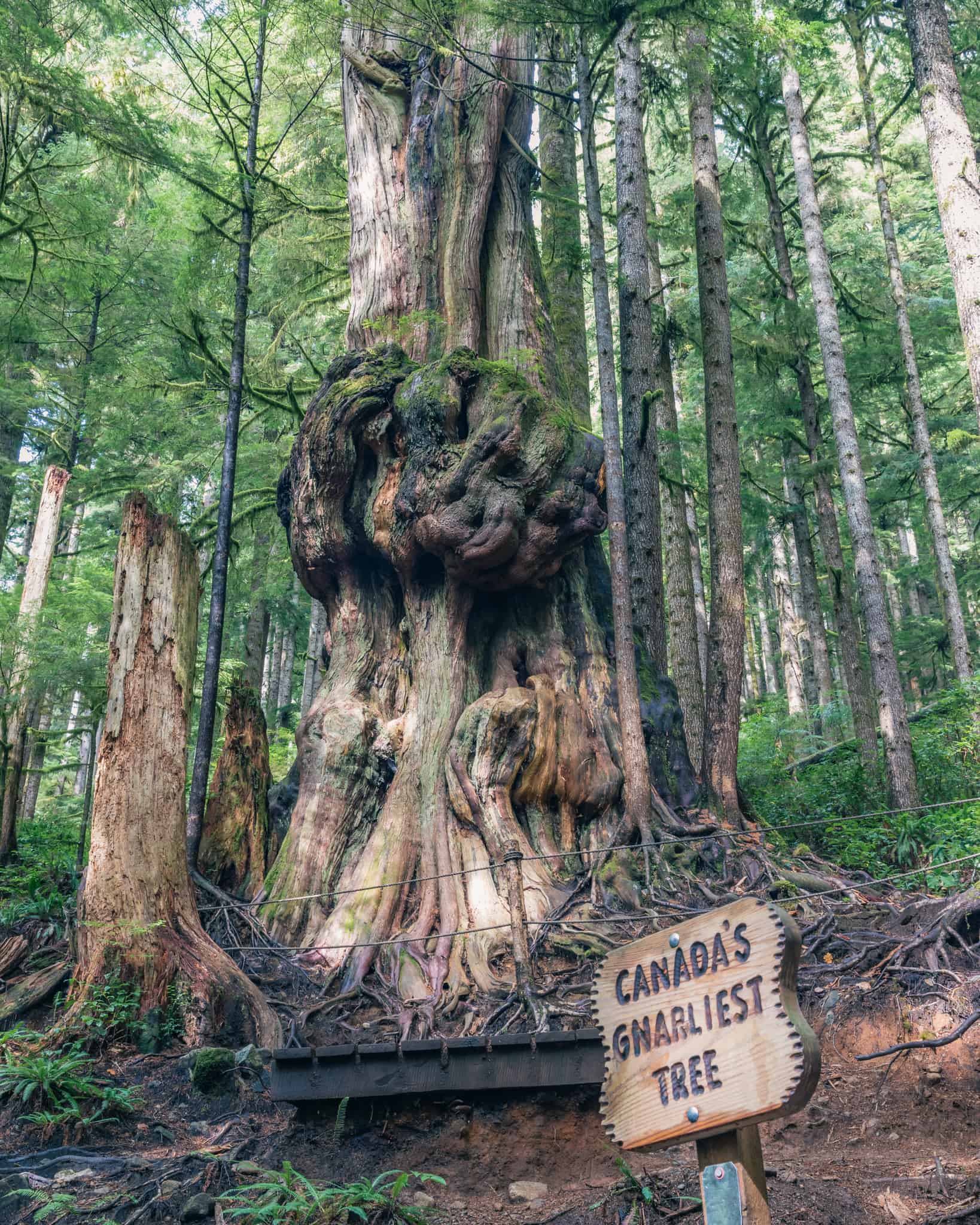 As we briefly mentioned in the introduction, the land surrounding Avatar Grove is the site of a hotly contested conflict between private logging companies and the environmentalists of the Fairy Creek Blockade.

We will go into this in more detail later, but for now, just be aware that you may need to answer a few questions at the checkpoint to prove you are simply hoping to visit Avatar Grove.

How to Get to Avatar Grove, BC 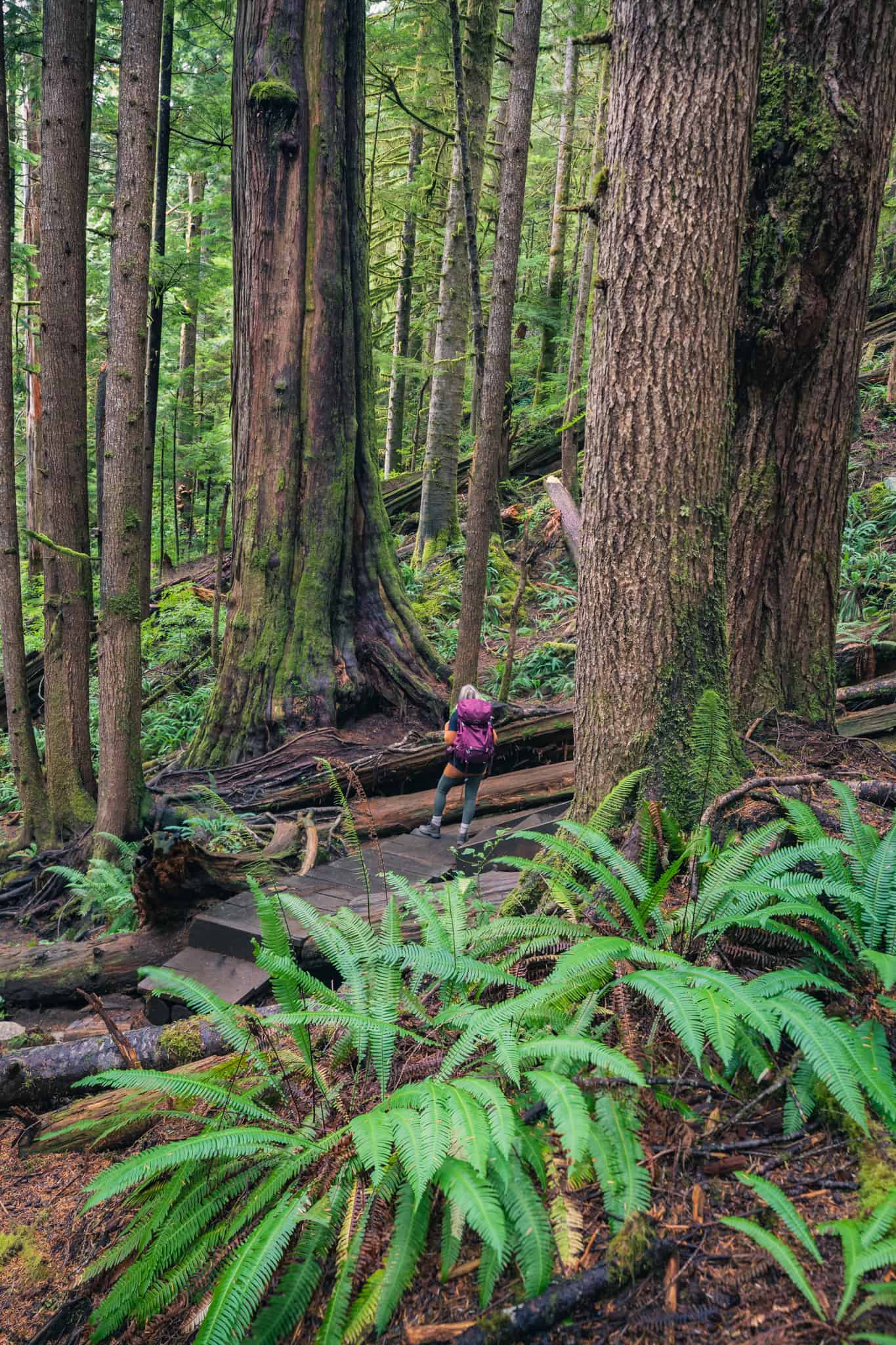 Okay, enough cautionary advice and on to the directions!

Avatar Grove is around a two-and-a-half-hour drive from Victoria or just 20 minutes from Port Renfrew. There is often very little cell service here, so paper maps or a guidebook may also be helpful.

To get to Avatar Grove, find your way to Port Renfrew using Highway #14.

Once you have reached Port Renfrew, turn right onto Deering Road. On Deering Road, you need to cross over the large bridge which spans the San Juan River and stay right at the Y junction after it.

Eventually, you will cross a small bridge and reach a T junction.

Take the left turn which takes you to Gordon River Main. Drive for around 5 kilometers until you reach another Y junction, take the left again here and enjoy crossing a beautiful towering bridge over the Gordon River.

Once you have crossed the bridge, continue along the gravel road of Gordon River Main, staying to the right at the next Y junction.

You will now pass another little bridge over Baird Creek. Park yourself up after the bridge and congratulations – you have arrived!

Look around and find the trailhead signs.

The Hikes Around Upper and Lower Avatar Grove 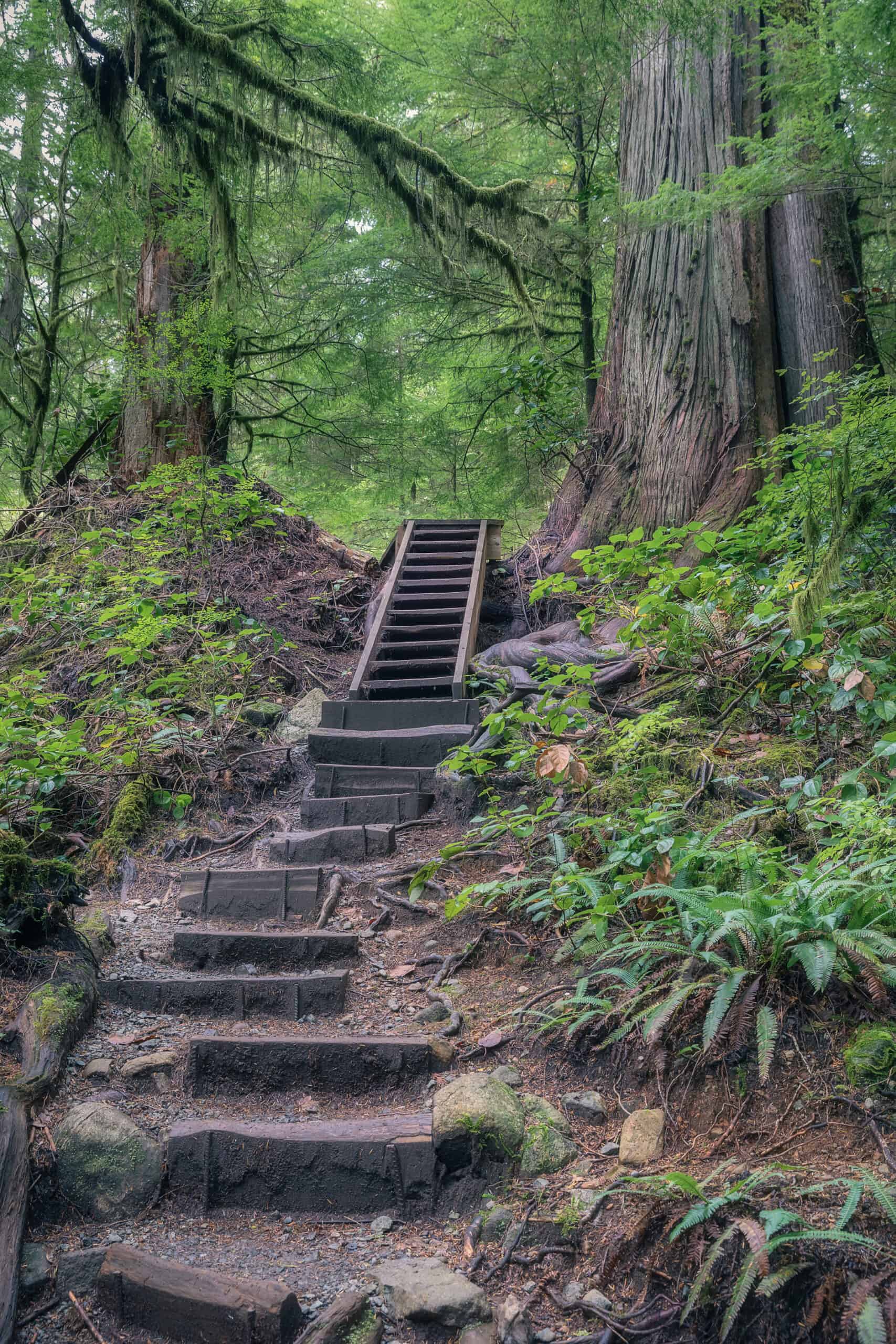 We will begin with the trail for Upper Avatar Grove, as this is the most exciting of the two.

However, both trails are relatively short loops, and it should not take more than an hour to enjoy both of them with plenty of breaks to admire the majesty of nature here.

The trail is not too difficult, but the elevation can be steep at times and there are definitely going to be trip hazards in the form of rocks, roots, and fallen logs.

It can get quite muddy here so we would recommend wearing hiking-appropriate footwear.

Other than these small things, the Ancient Forest Alliance has done a great job of creating and maintaining boardwalks throughout this area.

Eventually, you will come across the three-meter-wide monster that is Canada’s Gnarliest Tree – and don’t worry, you won’t miss him because he has a big sign.

Still, there are plenty of gnarly trees in the vicinity to give him healthy competition.

You should also keep your eyes peeled as exciting wildlife such as deer, elk, black bears, wolves, cougars, and even protected bird species are regularly spotted here.

Normal dangerous animal considerations should be taken, such as never approaching them and making plenty of (non-threatening) noise to ensure you do not startle them! 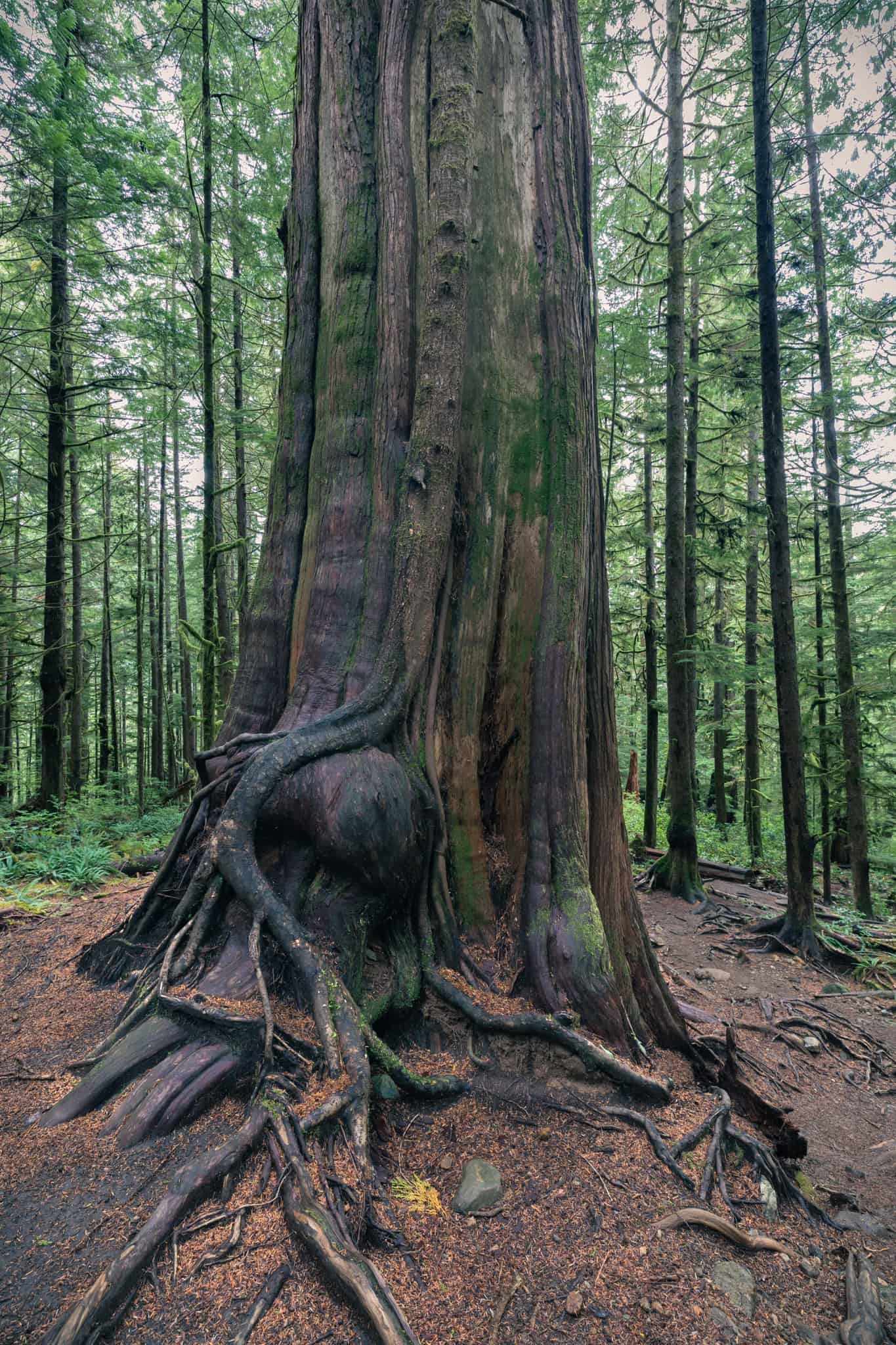 Big Lonely Doug is a poignant symbol of the struggle to protect this ancient ecosystem from being turned into forgettable furniture.

Your visit to Doug will likely be bittersweet, as his impressive size is in stark contrast to the recently felled new-growth trees around him.

While we ran out of time to visit him in person, you can view photos of other travelers’ experiences on Instagram.

To give you all the stats, Doug towers 70 meters above the ground – which for those of you without a meter-stick at home is around the height of a 21-story skyscraper.

The circumference of his trunk is 12 meters, while the branches at the top stretch out to a width of 18 meters.

This makes him the second-largest Douglas fir tree in the entire world, second only to the Red Creek Fir who lives only a short but difficult drive and hike away.

Using the rings of nearby stumps, scientists have managed to estimate Doug’s age at approximately 1,000 years old!

The unlikely story that led to Doug being the only tree spared by the loggers goes something a little like this.

In 2011, one logger called Dennis Cronin and was so impressed with the size of Doug that he wrapped an unofficial ribbon around him with ‘leave tree’ written on it.

Fate was clearly in Doug’s favor, as he was spared – and only afterward was it discovered that he was the second-largest Douglas fir still growing!

He finally gained his distinctive name in 2014 when an activist called T.J. Watt saw his graceful isolation.

View the Avatar Grove Map and you will see how to find Big Lonely Doug. 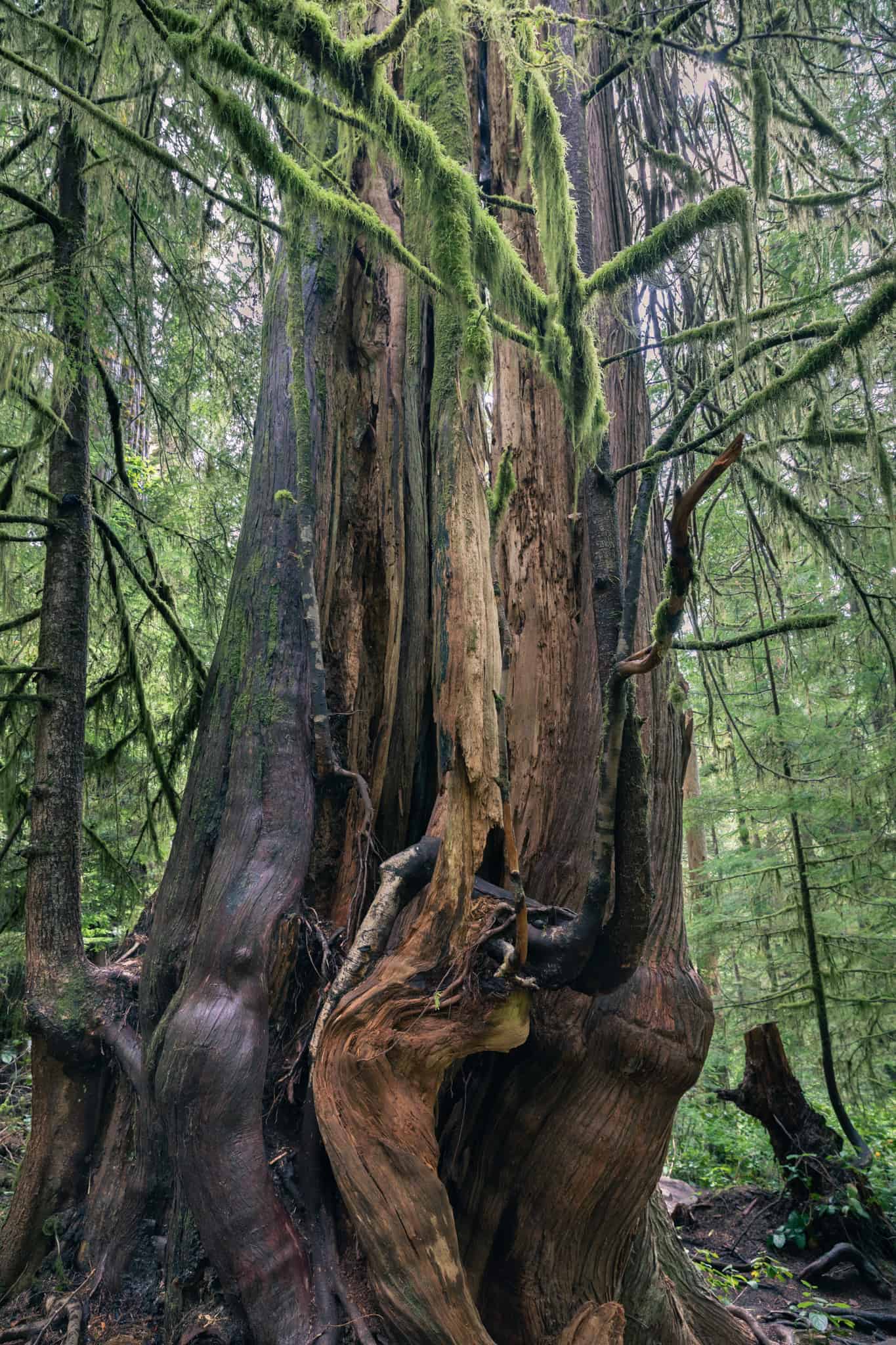 Why Preserving Old Growth Forests Is So Important

One of the things that unite our readers is a love of adventuring in the wilder, more untouched parts of the world. Unfortunately, as the years pass, these areas are shrinking and it is up to all of us to raise awareness, spread knowledge, and travel responsibly.

Your visit to Avatar Grove can be part of this help. By contributing to the (responsible side) of the ecotourism here, you are proving that old-growth forests are worth more standing than their value in timber.

Not only do the oldest forests of our planet make up our life support system, they actually release additional carbon dioxide when cut down.

When you pair this with the fact that they support diverse and plentiful ecosystems that can be found nowhere else in the world, it should be an easy argument for their preservation. 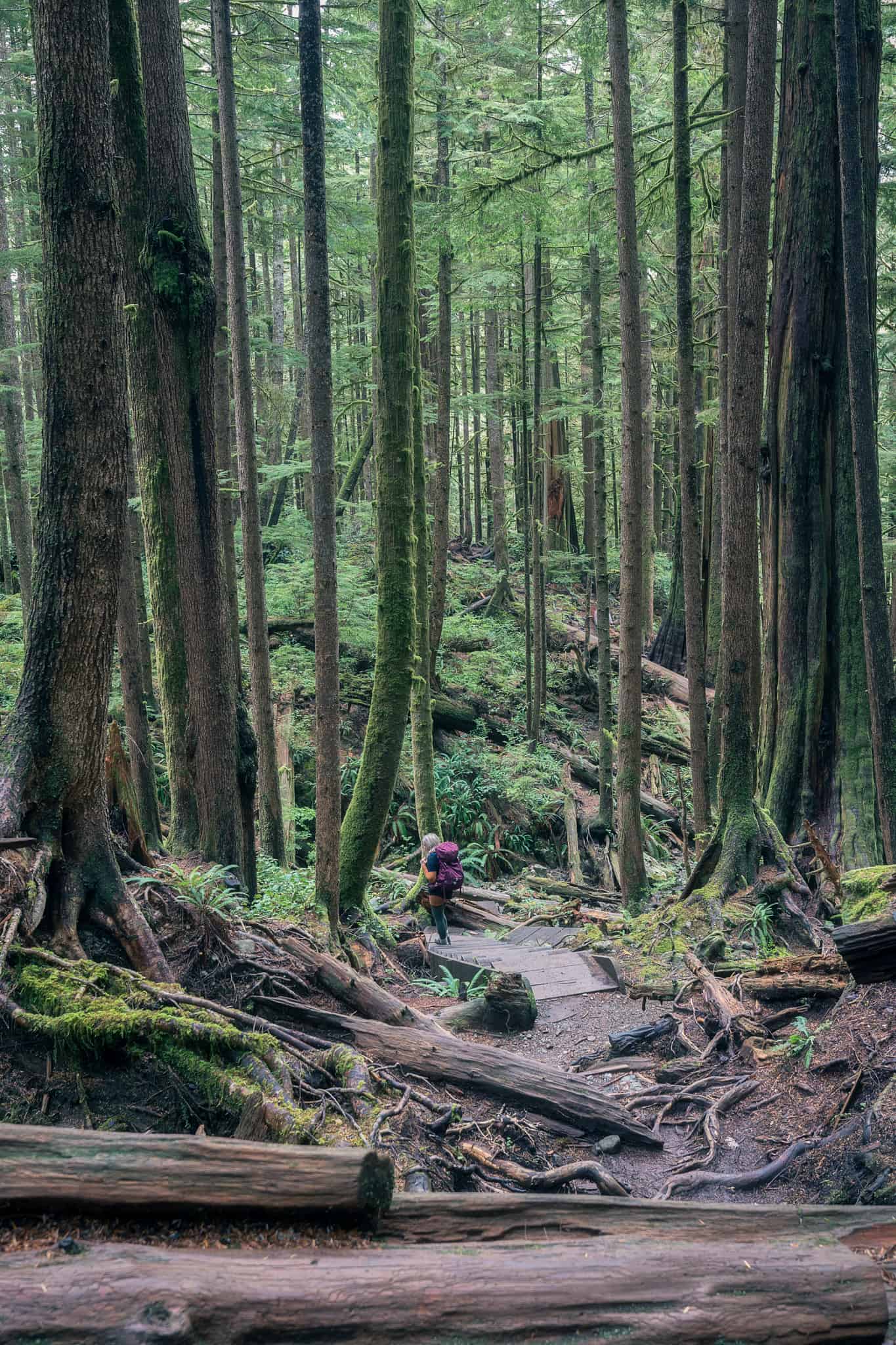 They are the oldest and therefore the hardiest against the worsening effects of climate change. They are also already appreciated by the people of British Columbia, as the majority when polled voted to protect them.

Unfortunately, the lax forestry laws of British Columbia undermine the will of the people – not to mention endanger the legacy and the home of the local First Nations people, who have been here long before us.

We encourage you to make your trip as sustainable and ecologically ethical as possible.

Support local businesses, leave no garbage or trace of your visit, and be careful not to tread too close to the old trees as this can damage their root systems. 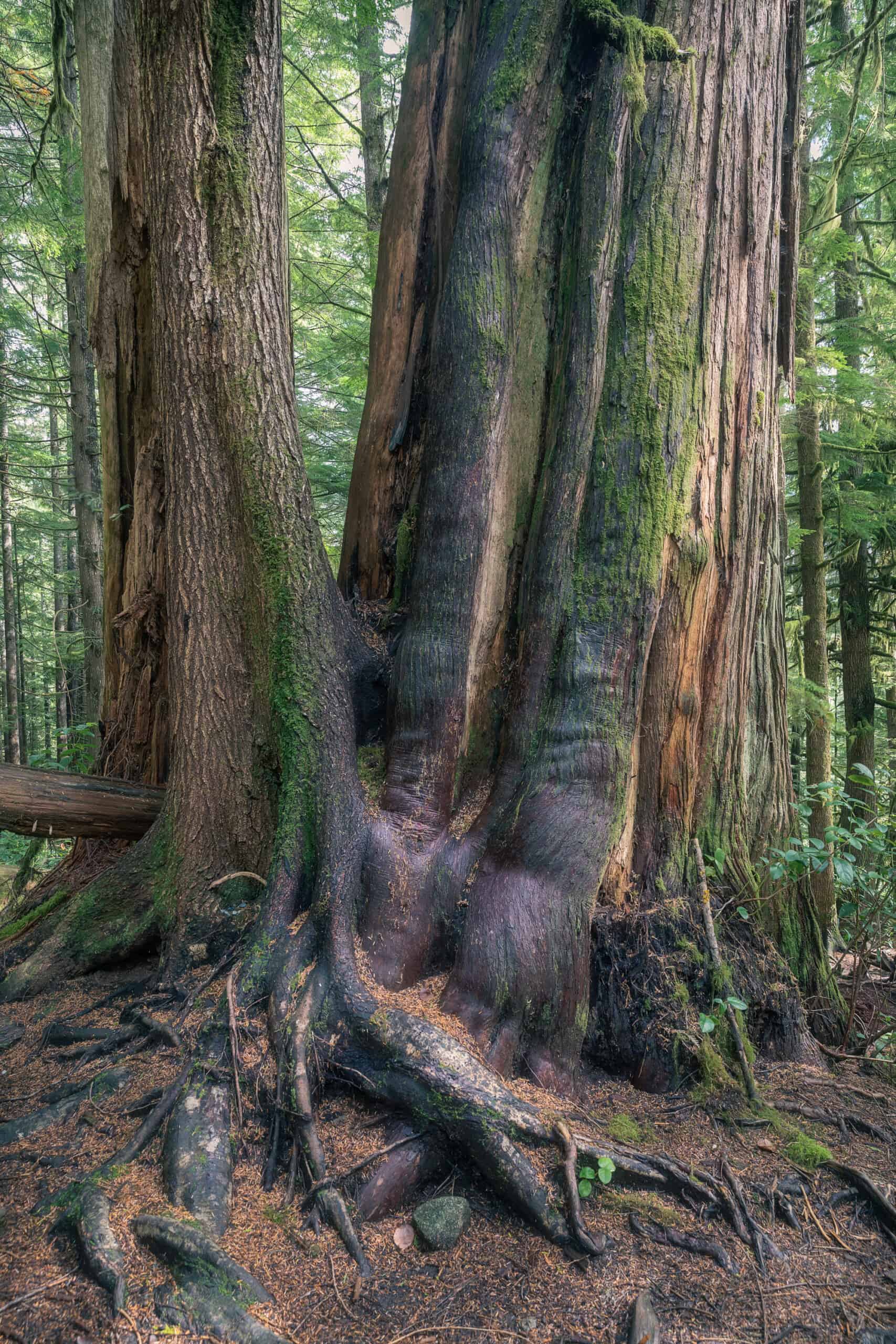 The Work of the Fairy Creek Blockade

Activists, locals, and other people all around the world have taken protecting this irreplaceable place into their own hands.

Since August 2020, a group of protesters has blockaded the logging road system near Fairy Creek, demanding a stop to the unsustainable logging that threatens the ancient ecosystem here.

You can find out the full story of what has been happening and how you can help by clicking right here. 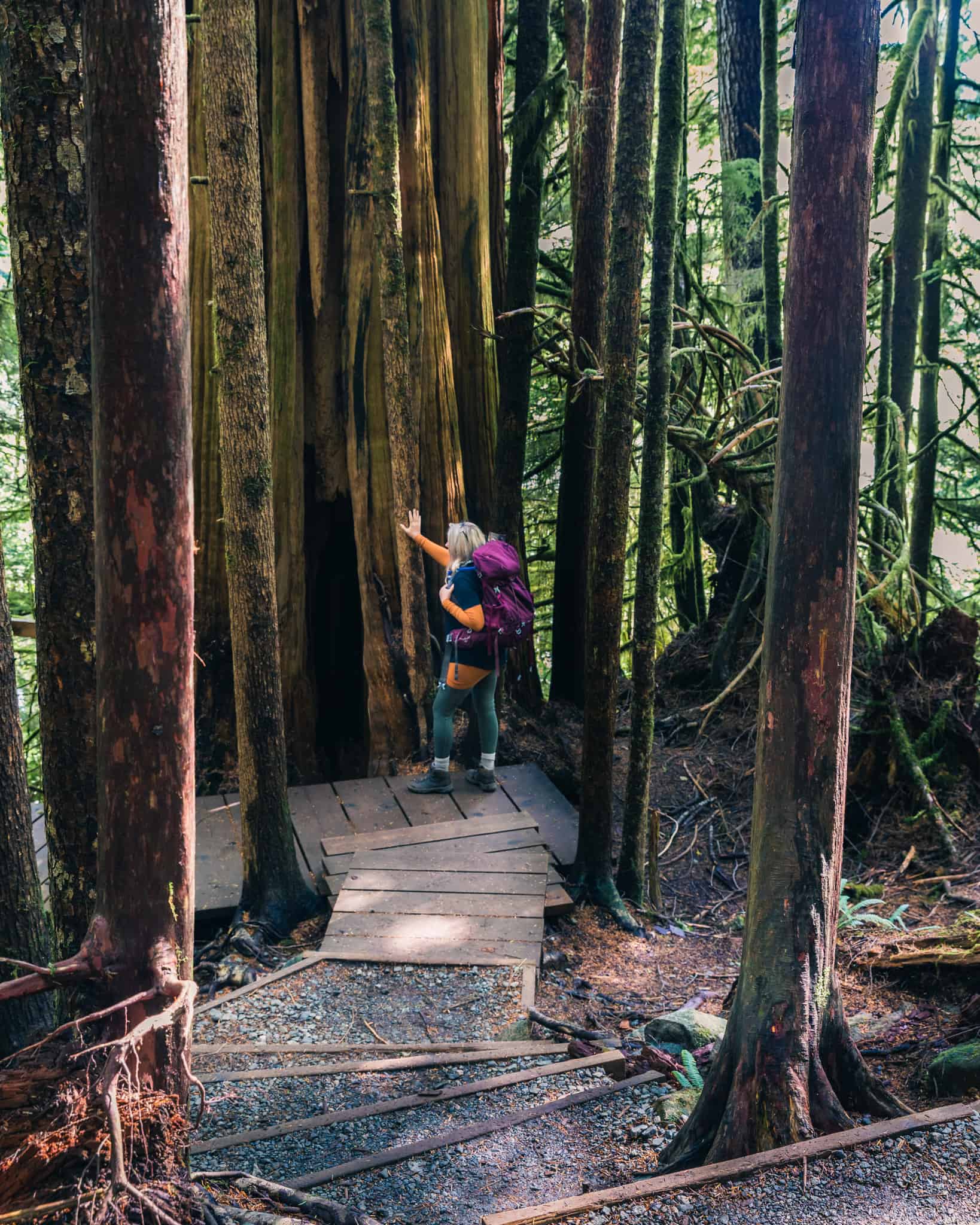 The History of the First Nations People at Avatar Grove

Avatar Grove is situated within The Pacheedaht First Nation.

The name Pacheedaht translates to ‘Children of the Sea Foam,’ a reference to the bountiful oceans of Vancouver Island that have sustained indigenous populations for what archaeologists and anthropologists believe is at least 5,000 years.

But it was not just the waves that have been home to the Pacheedaht, these ancient forests have been part of their territory for countless years.

Discover some of the Best Ever Vancouver Island Experiences: