Long Beach Tofino: One of the Best Beaches in BC

Long Beach Tofino: One of the Best Beaches in BC

Long Beach Tofino, which stretches along a staggering 16 kilometers of surf and sand, is also a key part of the Pacific Rim National Park Reserve. Whether you are looking to glimpse elusive sea wildlife, catch some gnarly waves, relax in the sands among other friendly beachgoers, or even peer into a mysterious old-growth forest that borders the driftwood-rich beach edge, Long Beach has something for you. 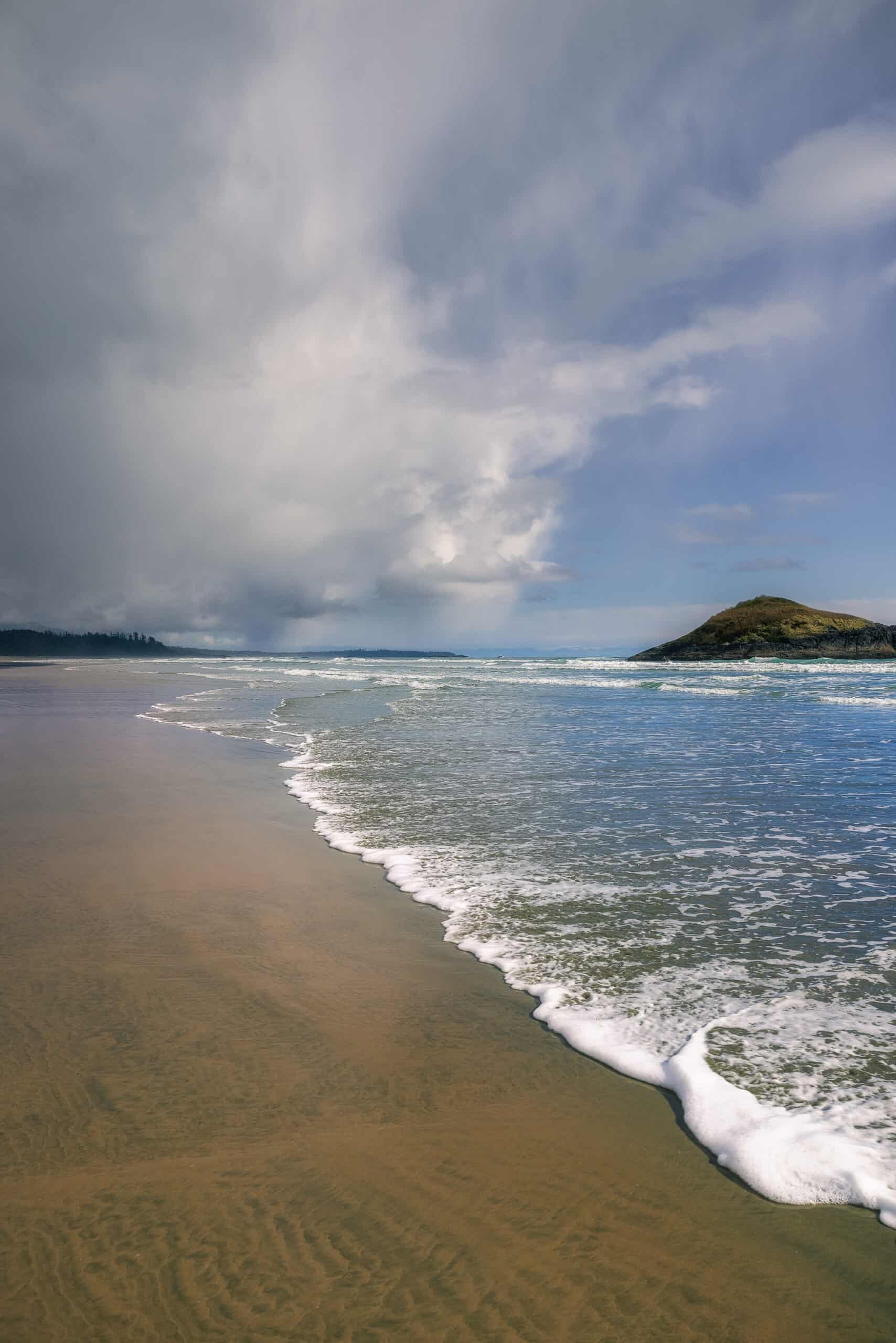 Long Beach is the name given to the stretch of sands that runs from Florencia Bay to the Wickaninnish, Combers, and Schooner Cove beaches. Together, this creates a stretch of 16 kilometers of unbroken golden sands, biodiverse sea, and beautiful natural driftwood art displays.

With a distance like that involved, Long Beach can fulfill any of your seaside wishes. Despite its popularity (almost one million visitors come here on average per year!), the huge size leaves plenty of room to relax in the sun either with or without neighbors, whichever you prefer.

The beach can also act as a trail, with much of the 16 kilometers bordering on a magnificent old-growth forest. Not only does this mean old and storm-tossed driftwood is plentiful, but it also creates a uniquely mysterious and romantic vibe that cannot be mistaken.

The section of Long Beach which is known as Combers Beach also plays host to an awesome tunnel, called Krummholz Tunnel. The tunnel, whose name means ‘crooked wood’ in German, was formed as salty sea winds and sand stunt tree growth. It is one of the many small natural miracles that make up the breathtaking topology around Long Beach.

How to Get to Long Beach Tofino

Long Beach can be found spanning its great distance between the villages of Ucluelet and Tofino, on Vancouver Island’s west coast. If you were wondering how to get to the west coast, simply follow Pacific Rim Highway 4 west from Parksville.

For parking, you have your choice of two car parking lots: Incinerator Rock or Long Beach lot. Long Beach lot is the largest of the two, and both can be found easily by following the green signs at the roadside.

Daily National Park use fees apply to Long Beach as it is part of Pacific Rim National Park Reserve, and you can find handy pay machines in both of the car parking lots.

Long Beach in Tofino is one of the places on Vancouver Island that you will be able to find a surf community that is active all year round.

Long Beach attracts all sorts of surfers, from those who have only surfed in their daydreams and have not yet touched a board, to seasoned professionals to whom the sea is a second home. As such, a thriving community of surfers has grown here and many of their businesses will provide everything you need to enjoy the churn of the Pacific Ocean meeting this slice of protected paradise. 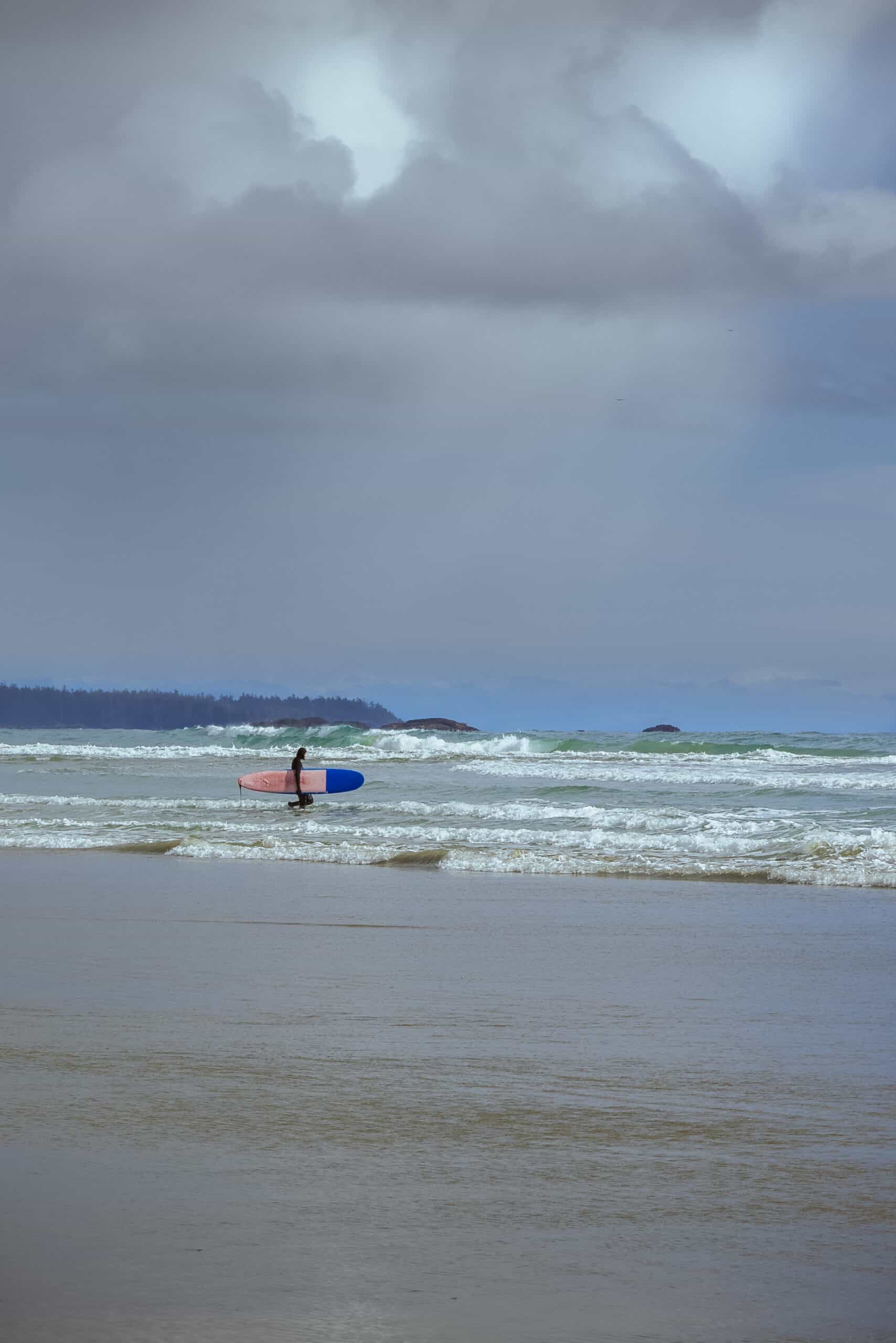 As well as the usual surf rentals and lessons, you can find some truly unique surf camps here for people of all ages, as well as Canada’s only all-female surf school which is designed to give women a safe and supportive environment to learn how to ride the waves.

Thanks to the wide expanse of western exposure at Long Beach, the wild waters here are also a favorite for true Maui-style windsurfing. It is true that the ocean here can be rough and intimidating at times, but don’t let that stop you from experiencing a tranquil day of offshore excursion in a kayak or boat when the weather is good!

In fact, when you take a year-long average, nearby Tofino takes the prize of having the highest mean temperature in all of Canada. It’s not hard to see why water sports enthusiasts flock from all over to come here.

The Biodiversity of Long Beach and Pacific Rim Natural Park

We gave you a small teaser about the bounty of nature around Long Beach earlier, but it’s time to unpack the full list of species and sights that you can expect to spy around these parts.

The 49,962 hectares of land that make up Pacific Rim Natural Park Reserve (which Long Beach is a part of) are home to a huge and diverse number of fish, amphibians, reptiles, birds, and mammals – many of which are unique due to their isolation over on Vancouver Island. Long Beach features its own island archipelago and neighboring stretch of old-growth rainforest, as well as the obvious sandy stretches, encouraging three geographically separate areas of biodiversity. 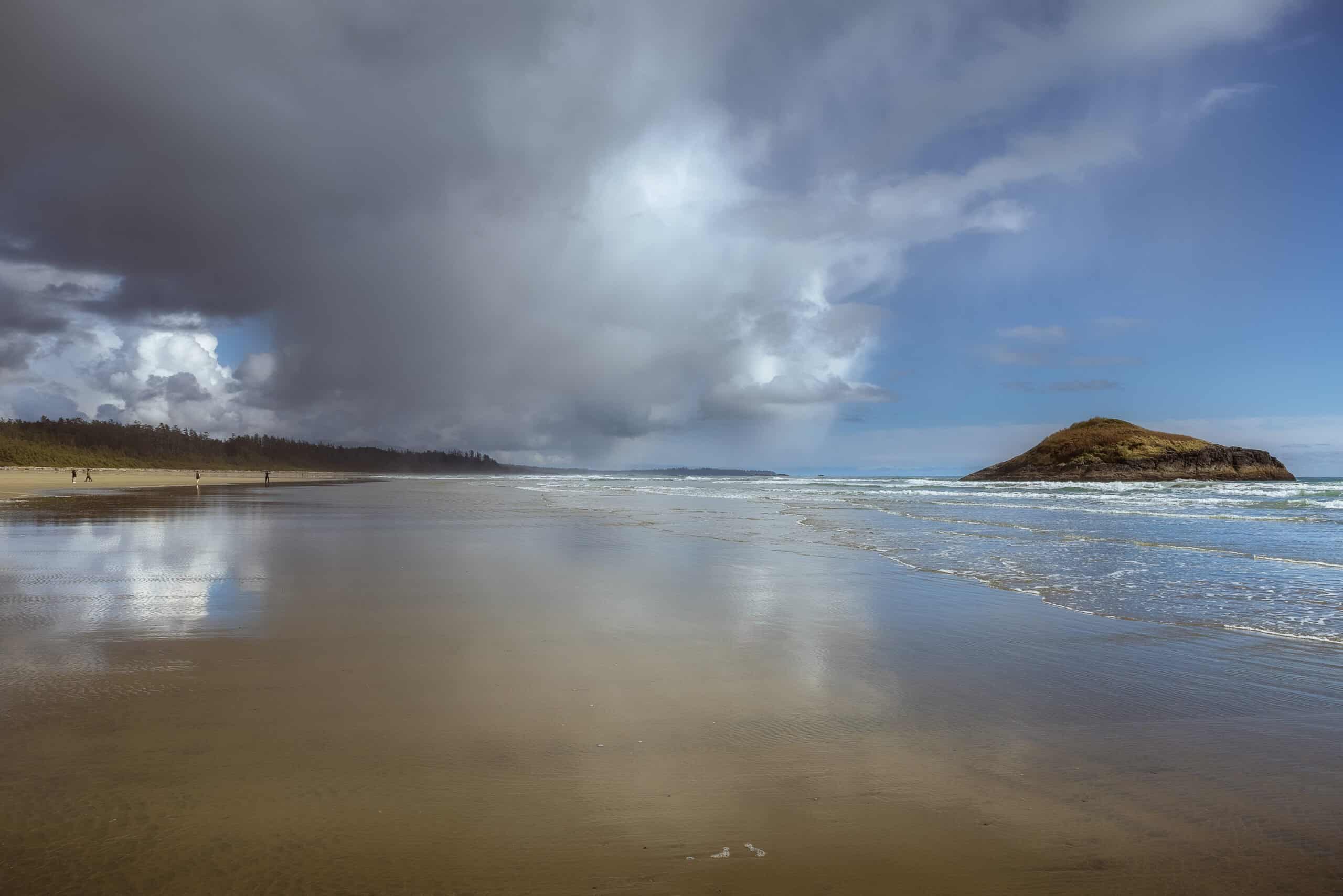 On the beach, it is common to see large starfish in amongst the kelp and seaweed, as well as sea lions and curious seals – and of course, large varieties of local and migrating seabirds flying overhead. Even more exhilarating is the prevalence of grey whales in this area, with multiple whale watching tours thriving here.

Should you journey a little further inland into the old-growth rainforest that borders the beach, you could glimpse a long list of wildlife that includes muskrats, voles, shrews, squirrels, otters, weasels, mink, marten, raccoons, deer, cougars, bears, and even the elusive Vancouver Island wolf!

If you are looking to spend a few days in and around Long Beach Tofino – and we wouldn’t blame you, there is plenty to see – we can recommend an excellent campground. In fact, this is the only place you will be able to legally camp the night overnight on these gorgeous sands. 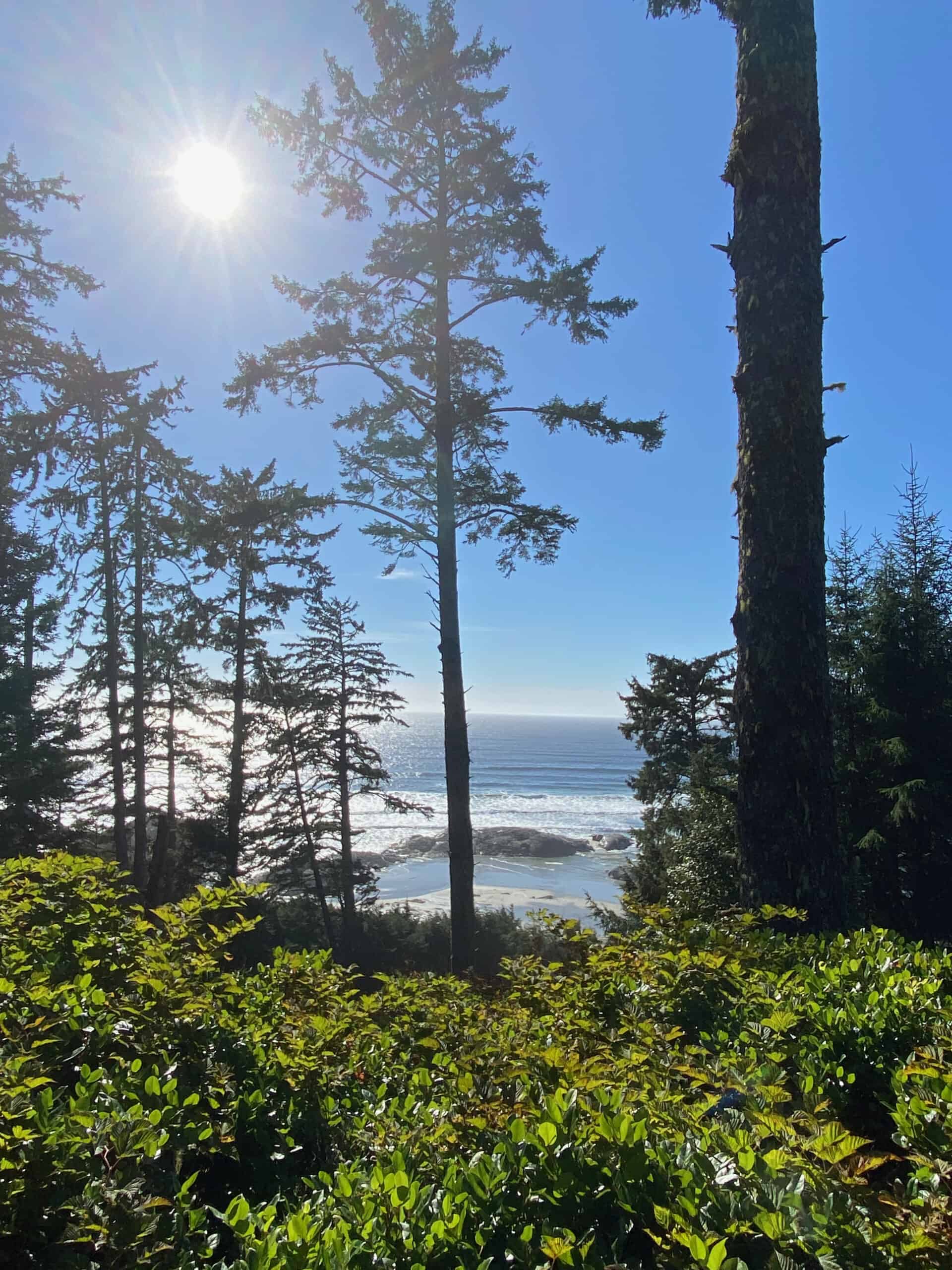 Green Point Campground can be found just 10km to the north of the junction between Tofino and Ucluelet on Highway 4. There are both vehicle and tent sites on the beach itself, as well as a special information service run out of the campgrounds by Parks Canada.

A total of 94 drive-in RV campsites (with 15- and 30-Amp hook-ups), 20 walk-ins, and a group site make up the grounds. The amenities here include flush toilets, a sani-dump, and showers. You can also bring your furry friends along with you.

As Long Beach is such a popular location and this is the only campground, the site fills up to capacity almost every night during the high season – so we would recommend booking ahead to avoid disappointment!

The History of the First Nations People

As with all of the most beautiful locations in this part of Canada, the unique landscapes and ecosystems here have been stewarded through the ages by the ancestors of the First Nations people who still call this place home. 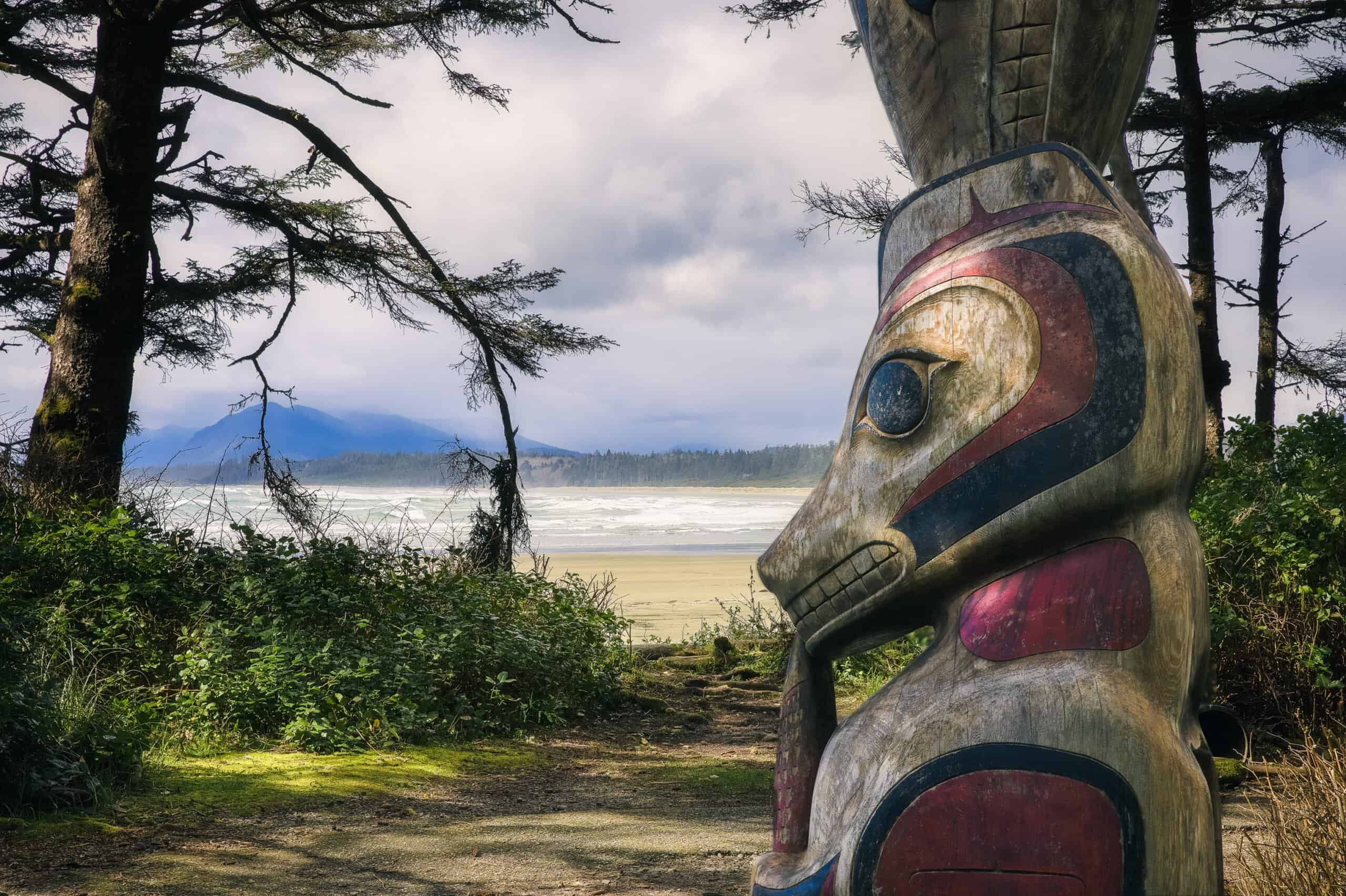 The prevalence of whales around the area that now makes up Long Beach and the Pacific Rim National Park has been essential in Nuu-chah-nulth culture. They were one of the few indigenous peoples who practiced whaling, and this is still present in their culture and spirituality through stories, songs, and names. In fact, carbon dating done on whale bones shows that whales were being hunted for blubber and meat here as far back as 4,000 years ago.

Now you can come to this part of the world and see the waves and the bountiful landscape that has sustained civilization for millennia. As such, make sure that you travel responsibly and sustainably, leaving no trace and supporting ethical ecotourism wherever possible!