All About Kelowna BC

All About Kelowna BC

Kelowna is the perfect place for, well… anything! This city of unrivaled vibrancy keeps visitors coming back for more every time. Not to mention it totally transforms between seasons. For lovers of the wilderness, of impossibly good food and wine, of locally booming arts and culture, as well as for fans of beach and lake activities, there’s not a place in British Columbia quite like it. 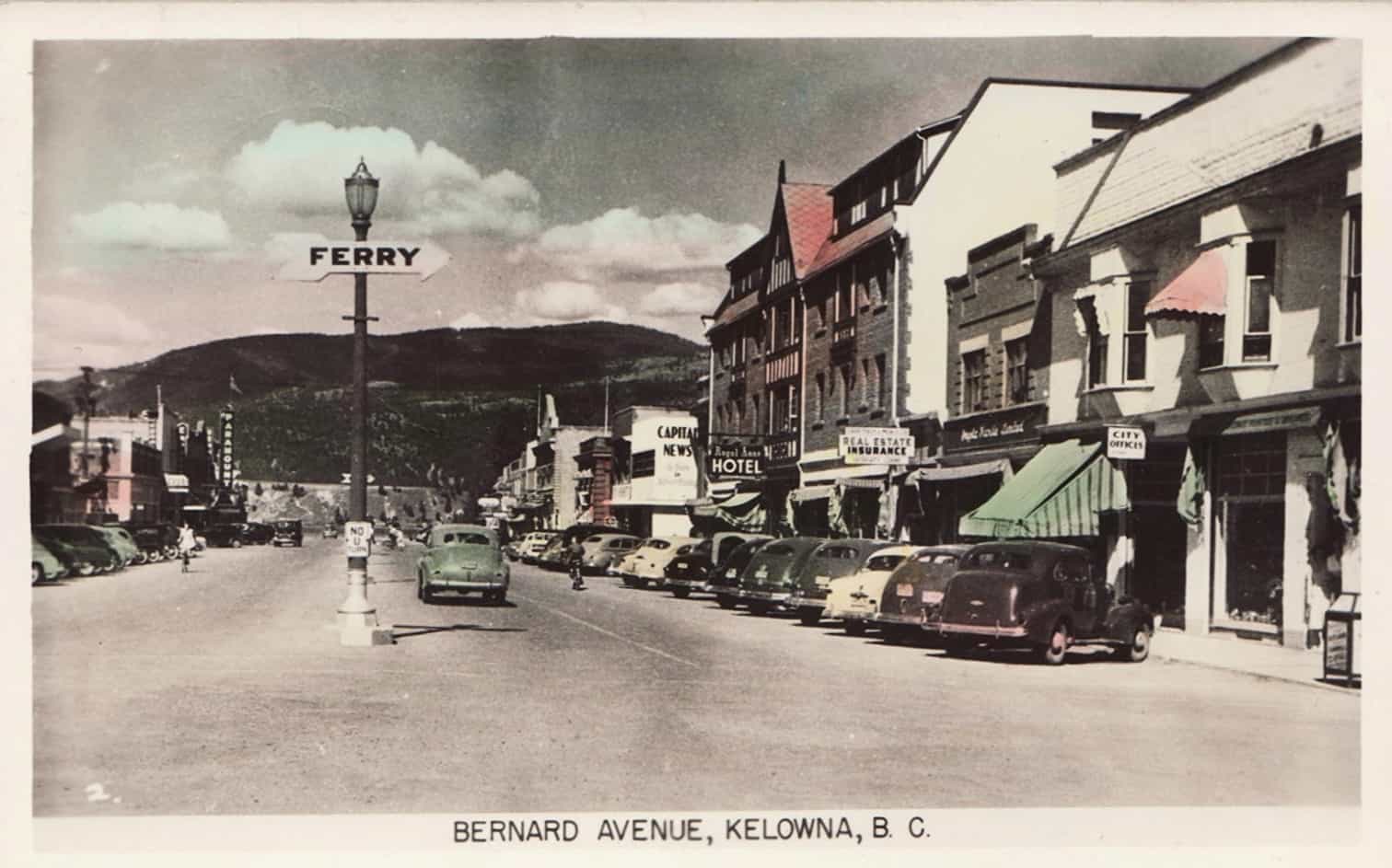 One of the biggest joys of exploring anywhere in British Columbia is picking up echoes of the past, and Kelowna is no different.

The same breadbasket of natural bounty responsible for some of Canada’s most influential wineries and farm-to-table restaurants has long sustained humanity here. Estimates trace the Sylix people of the Okanagan First Nation back over 6,000 years. They carved their niche here millennia before the first grapevines were planted, thriving in equilibrium with nature.

Today, the Sylix First Nation continue stewardship of these life-giving lands, honouring the natural laws of the tmixw, which means ‘that which gives us life.’ However, Kelowna did not get its name until the arrival of European missionaries in 1859.

The story goes that, in 1905, when the city was just 600-strong, an early settler named August Gillard crawled out from an underground shelter in time to hear the calls of a passing group of First Nation people. “Kim-ach-touch,” they called out, which meant brown bear. Thus, the city got its name. Over time, ease of pronunciation caused the slow shift to Kelowna, meaning grizzly bear, but the city still retains its primal roots.

With settlers came the bloom of Kelowna’s famed orchards, which before long gave rise to the vineyards that put the Okanagan on the international wine stage. You can find out more about this fascinating process in one of Kelowna’s many museums, which we will cover in detail further down the page.

More recently, Kelowna has become one of the most rapidly growing cities in Canada – and who could blame folks for flocking here? The city and its surroundings have even drawn the eyes of the film industry, backdropping multiple international and arthouse movies.

DRIVING TO KELOWNA, BC 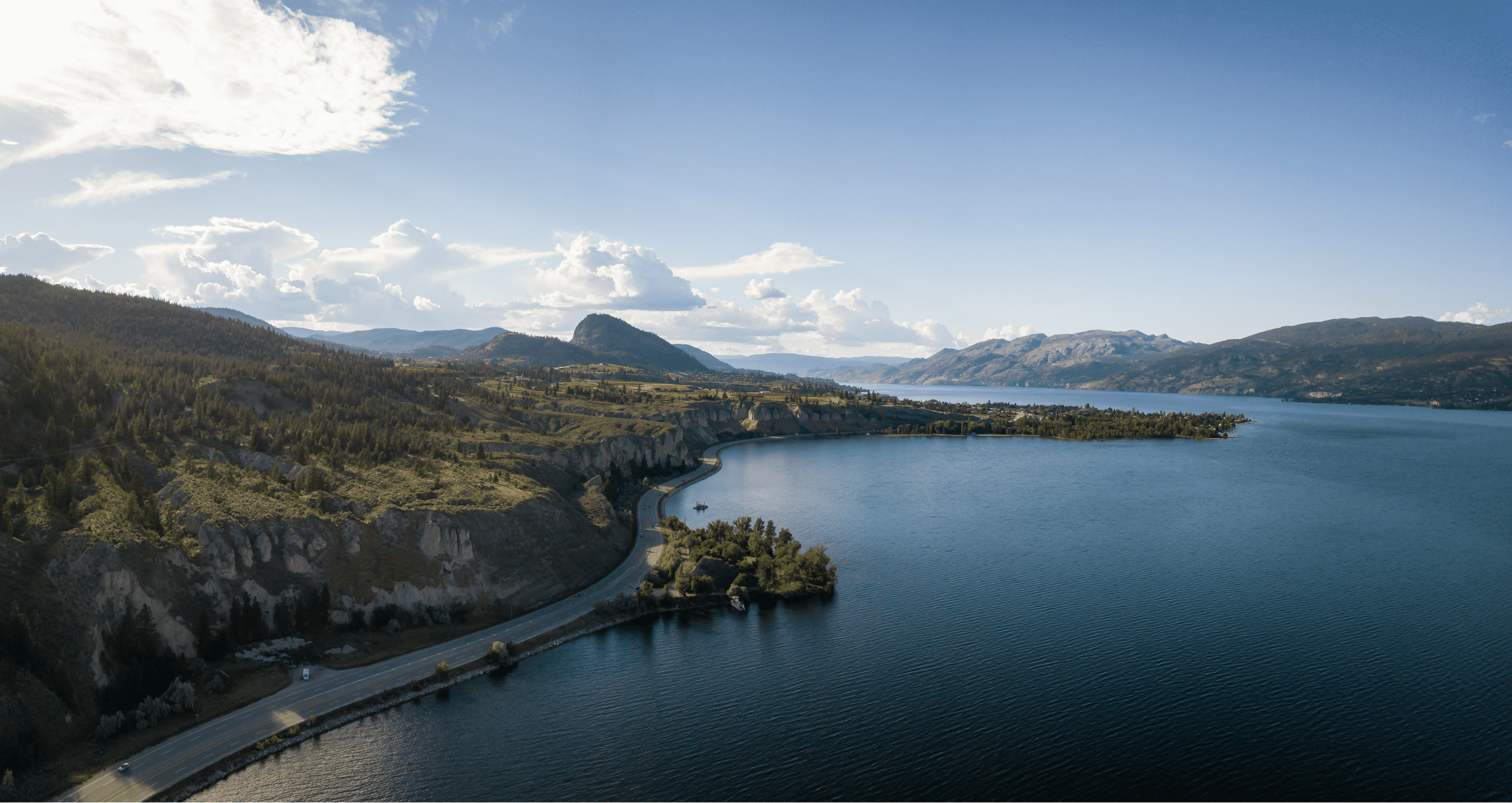 So, you’re hooked, right? We can practically hear you tapping the journey to Kelowna into Google Maps – but hold it right there! No good road trip would be complete without a few choice stops along the way, so here are our hot tips.

Inside Scoop: Follow the Trans-Canada Highway and make sure to stop at Bridal Veils Provincial Park.

A breezy 25-minute hike will reward you with a stunning view of the 122-metre glory of Bridal Veil Falls, where cascades spanning 23 metres across create the bridal veil effect that gives the park its name.

Winter road-trippers be advised that due to becoming an imposing wall of ice, the falls are closed during the cold season.

Approximate Distance: 600 km westwards, averaging between 7 and 8 hours of driving.

Inside Scoop: This one’s a long road trip (even taking you through two different time zones!) with high taste potential, so instead of packing lunch, stop at one or more of the following. 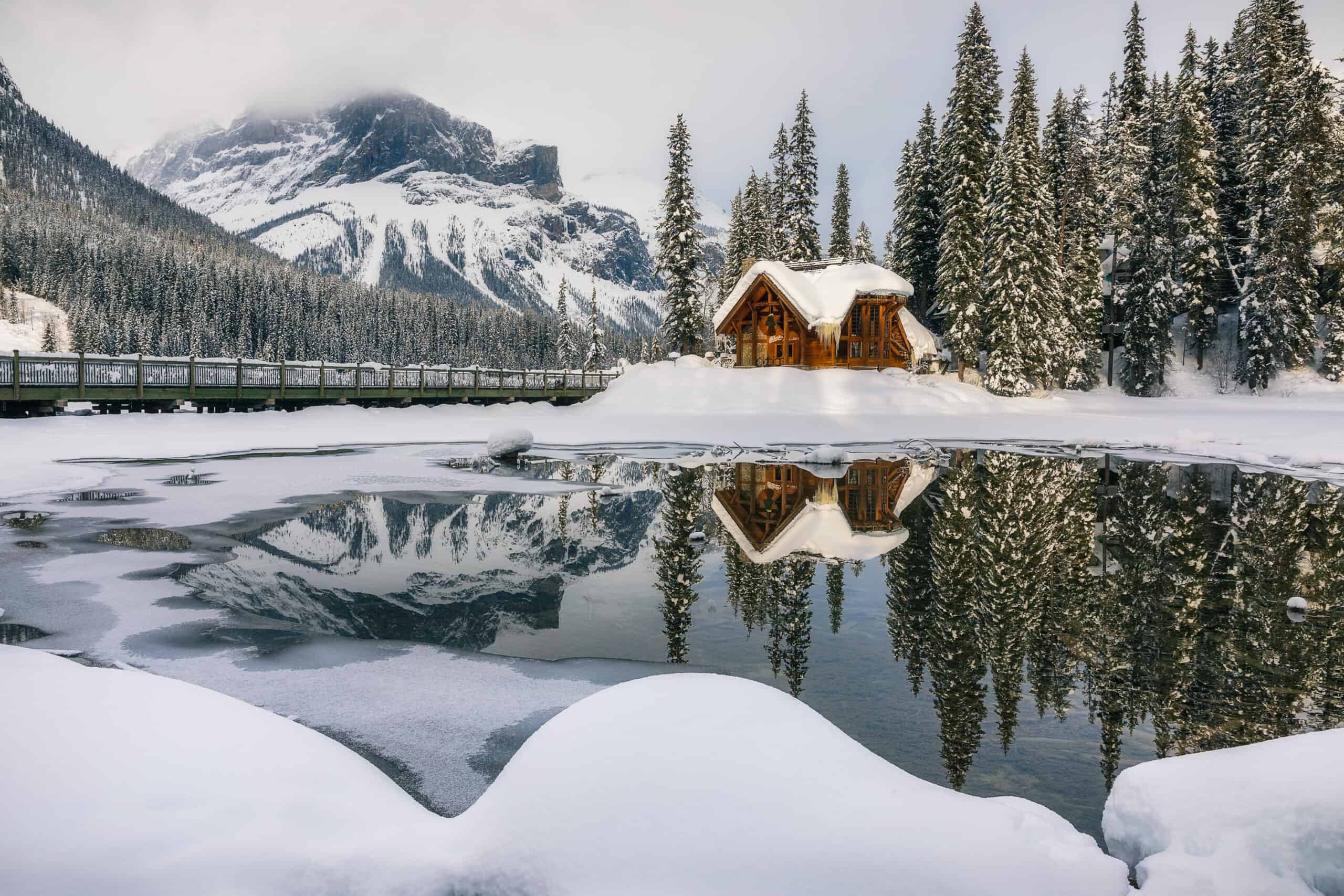 Inside Scoop: Lucky ducks taking this road trip can expect to be burbling with excitement as they follow the gorgeous banks of Okanagan Lake.

With a journey this short, we wouldn’t recommend packing snacks. Instead, pay a visit to Okanagan Marketplace in Falkland along the way. Their spread of farm market produce, lunch options, and crafts are a true taste of the local specialties.

Inside Scoop: The short distance means you’ll have plenty of time for a trip to Sun-Oka Beach Provincial Park along the way. The name is a shortening of ‘Sunny Okanagan,’ and the beaches here are as paradisical as their name suggests. With heaps of amenities, picnic spots, and protected old-growth cottonwood trees, you won’t be disappointed by this detour.

Approximate Distance: 50 km southwards, averaging around three-quarters of an hour of driving.

Inside Scoop: Rolling lakeside views make this an ideal journey, with one essential stop along the way.

The healing waters of Kalamalka Lake would be criminal to simply drive past. A unique phenomenon of limestone dissolved in the water from long ago receded glaciers brings a touch of the Caribbean to these British Columbian waters. You’ll have to see it to believe it. 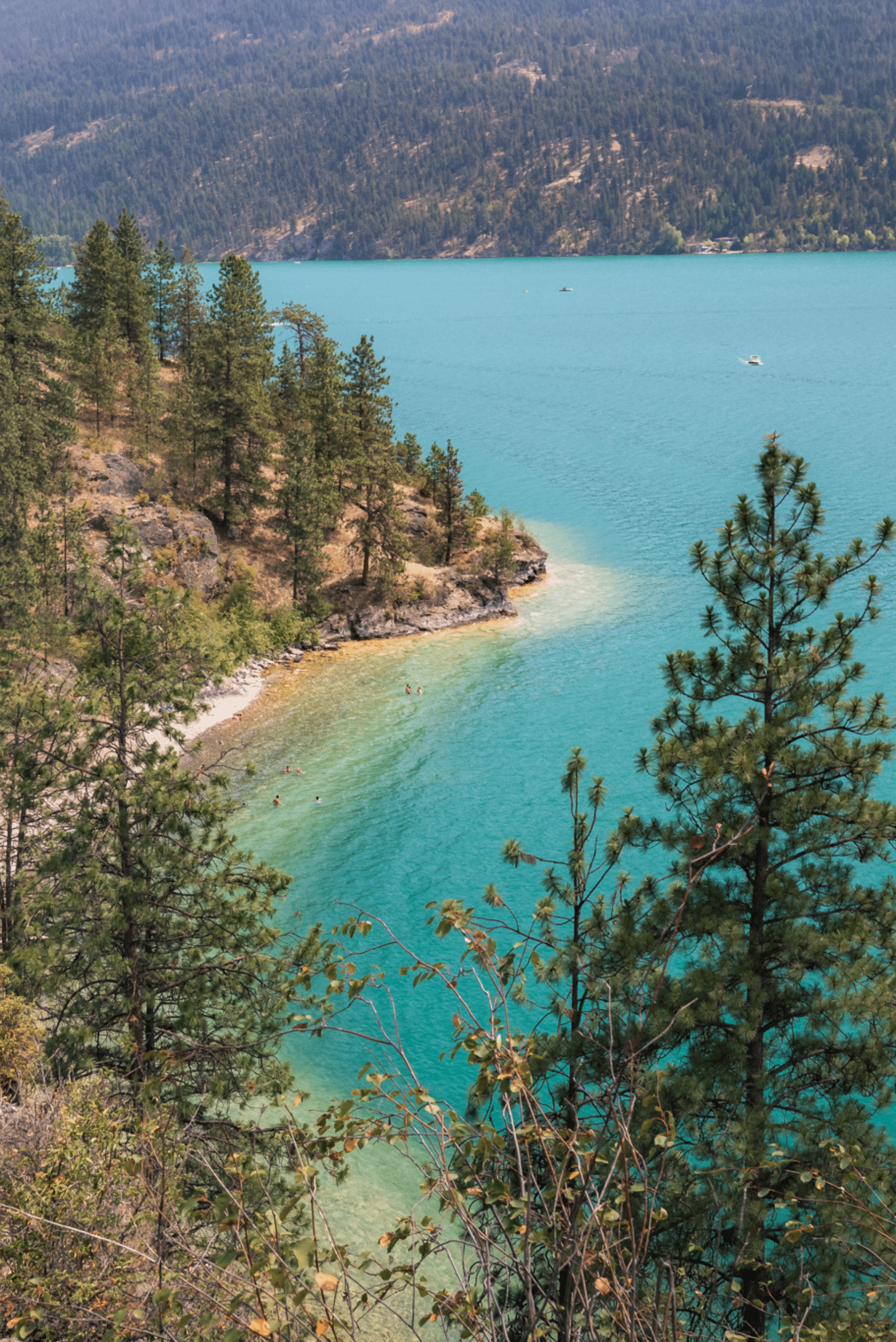 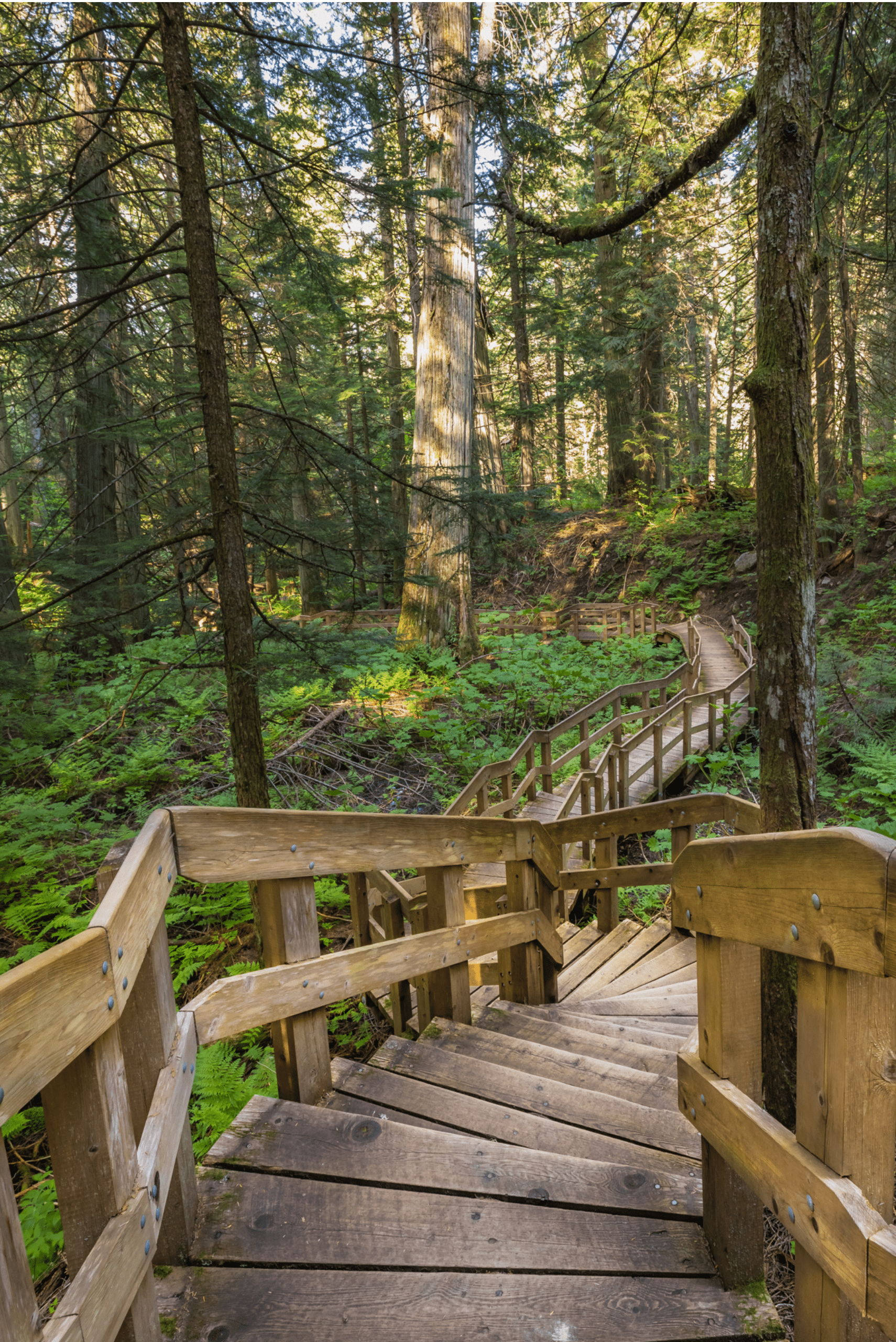 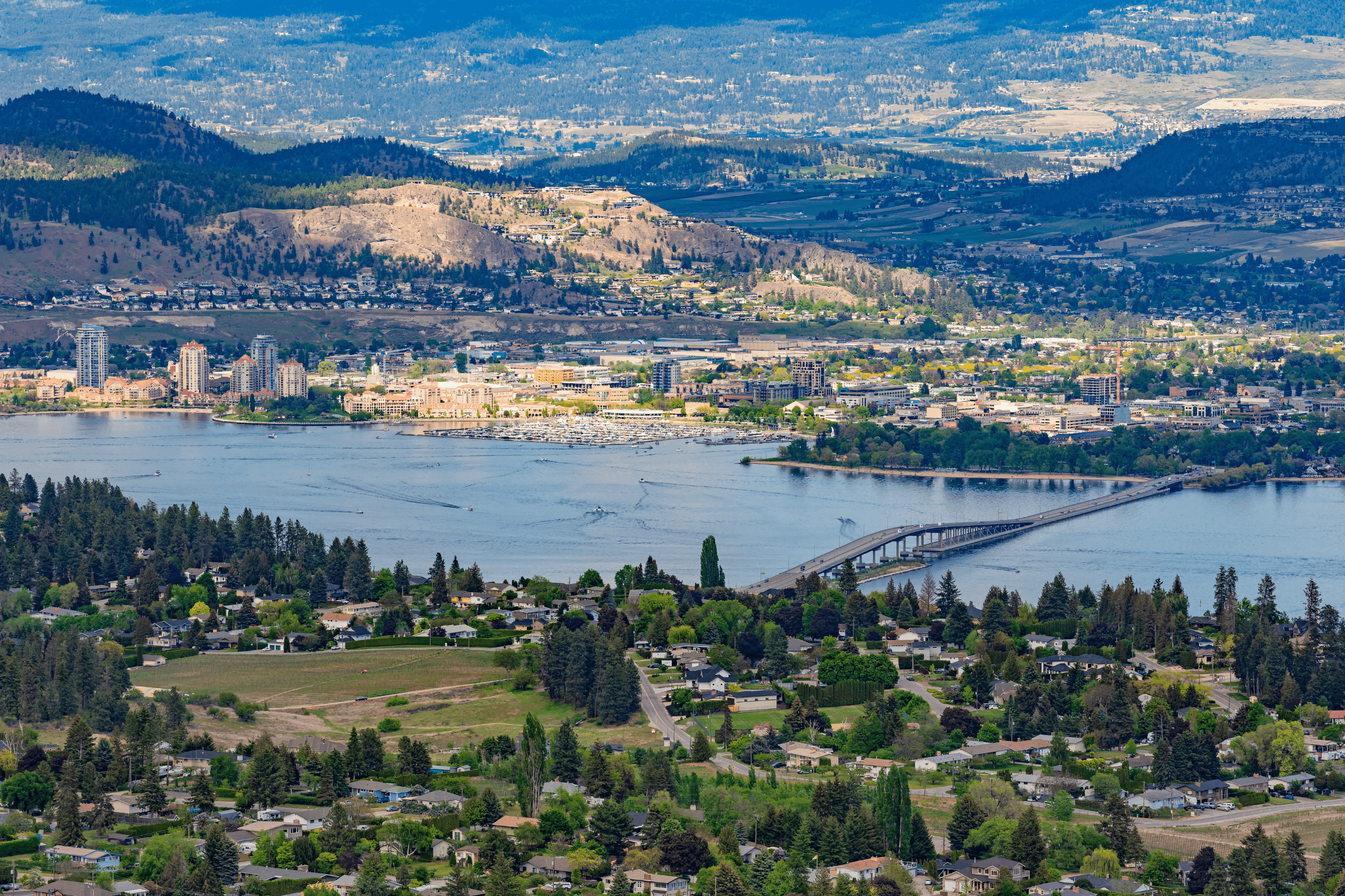 If you lack your own transport to explore Kelowna and its surroundings, don´t worry. The Regional Transit System blesses the city with excellent bus services.

As well as being well-connected and environmentally friendly, the service is also wallet-kind. You can pick up an all-day pass for just five dollars, leaving more of your budget for fun. If you’re lucky enough to be doing an extended stay, they offer a ten-journey pass for even greater savings!

One thing about Kelowna is that Uber hasn’t expanded operations here yet. This means using local taxi services, old-fashioned style! If this is an unwelcome novelty, check out Kelowna Cabs for easy app-based booking.

Getting around downtown couldn’t be easier, either. Plenty of places offer bike rentals and shared bike or scooter services for efficient city exploration. However, you can’t beat a simple waterfront boardwalk stroll if you aren’t in a hurry. Breathe deep and soak up the unique atmosphere of metropolis meeting wilderness.

When is the Best Time to Visit Kelowna, BC?

As a popular tourist destination in Canada, Kelowna is a year-round playground full of adventures.

Mild winters and lots of snow attract skiers and snowboarders and fair-weather families. Crowds are less plentiful, and hotel rooms are easier to come by.

May through September is Kelowna’s busiest period with July and August generally being the hottest months. The great weather brings bigger crowds, so competition over amenities may be fierce and hotel costs will be at their highest. If you do visit during this period, pre-book everything to avoid disappointment.

Keep in mind, the summer months can bring quite warm temperatures. Summer 2021 was the hottest on record ever recorded in the US and Kelowna was no different with many days blasting past 40℃. Typically, we enjoy weather ranging from high 20’s to low 30’s which make for perfect days out on or beside the beautiful Okanagan Lake!

If you wanted a sun-dappled stay in Kelowna, our recommended months are May, June, and September to avoid larger crowds and enjoy more mild temperatures.

Fall is also a magical time to visit, and our favourite time of year as Kelowna locals. October’s changing leaves really make the scenery sing, especially if you plan to spend some time Kelowna fruit picking, orchard wandering and visiting Kelowna wineries.