(Watch the most romantic movies of all time.)

Our hearts swelled as we were creating this list of best romantic movies ever. The movies are ideal for showing romantic love stories. Through the screen, we can see the relationship develop and the lovers draw closer. By the end of the film, a good romance will leave audiences with tears in their eyes. Though the best romantic movies ever might be a little predictable, nothing makes the heart swell more than watching a couple fall in love.

There are many ways that these love stories can develop in the best romantic movies ever. In some cases, it can be the unconventional tale of a father trying to manage the costs of his daughter’s wedding. At other times, it could be the tale of two lovers struggling to stay together while a gang war threatens to tear them apart.

While not every film may have a happy ending, they will all leave the audience deeply moved. Whether you’re laughing or crying, a good romance will be able to engage you emotionally. So, grab the popcorn, put out the scented candles, and snuggle with your partner. Here’s our selection of some of the best romantic movies ever. 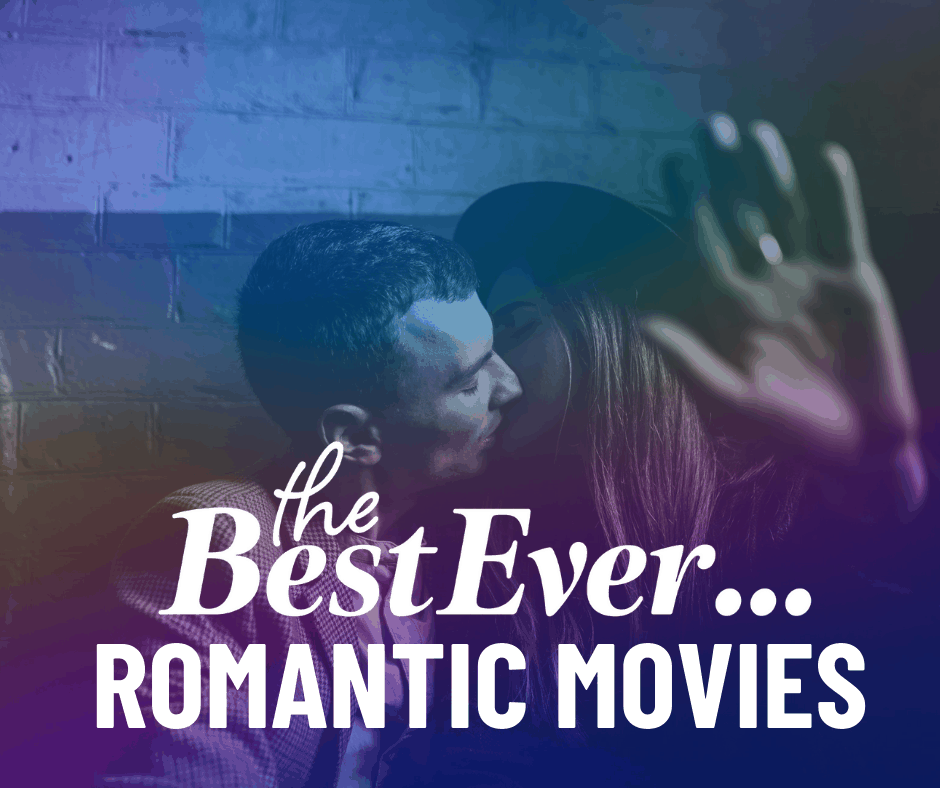 A Star is Born

Summary
This film has been remade and reshot numerous times since it was first made in 1937, where it stared Janet Gaynor. Then, it was remade again in 1954, with the lead played by Judy Garland. In 1976, Barba Streisand and Kris Kristofferson starred. The most recent adaption came out in 2019, with Bradley Cooper and Lady Gaga taking the lead roles. These films tell the story of an aging star, who finds a younger woman. He shepherds her into stardom. But, while her star grows, his alcohol abuse causes him to continue to diminish, with tragic consequences.

The fact that the story has been remade so many times, for so many generations, shows how powerful it is. The most modern remake, with Gaga and Cooper, is the best place to start. It was nominated for several Academy Awards.

Best Line
“I hope it’s OK if I love you forever, Jack.”

Summary
Silver Linings Playbook can strike a perfect balance between comedy, romance, and drama. The result is a memorable and warm-hearted film. After a mental breakdown, Pat is forced to move back in with his parents. As he’s trying to get his life together again, he meets Tiffany, who promises to help him win his wife back if he’ll help her fulfill an unusual request. He’ll need to enter a dance competition with her.

There are plenty of elements that help set this film apart. First, it has an amazing cast. Bradley Cooper, Jennifer Lawrence, Jacki Weaver, Chris Tucker, and Robert DeNiro all share the screen. With such talent, it’s no surprise that the film was nominated for several awards, with Jennifer Lawrence winning the Academy Award for Best Actress.

It also has discussed mental illness, and how it can impact people’s lives. But the big attraction is the romance that develops between the central characters, which left audiences around the world with warmer hearts.

Best Line
“You love her even before you realize it.”

Summary
One of the most popular musicals of all time, West Side Story is a re-imagining of the classic tale of Romeo and Juliet. This time, instead of warring families, it’s gangs that threaten to destroy the lives of the young lovers. Tony and Maria will need to go against the advice of their friends for their relationship to survive.

Though it might be a familiar story, this film interprets it in a new way. Though it’s isolated to a few locations, it still has an epic feel. This is because of the spectacular dancing. While a dance knife fight might seem like a silly idea, the film makes it real, sucking the audience into the story. Critics and audiences alike were entranced by this film. It won the Academy Award for Best Picture. It also helps that there’s such an iconic soundtrack, featuring hits like Maria and Tonight.

Best Line
“I’ll see my love tonight and stars will stop where they are.”

Summary
This film touches on an age-old debate. Can men and women ever just be friends? In this film, Harry and Sally meet in college, where they argue about men and women can ever just be friends. Harry maintains that it would be impossible for sex not to become an issue. Sally disagrees and they part on bad terms. Years later they meet again and disagree again. To decide if it’s possible, they try to maintain a strictly platonic relationship. Though, when they start to fall in love, they realize that this might be harder than they had first thought.

This film is full of iconic scenes and moments, especially the fake orgasm scene. This film comes alive because of the exceptional acting, with Billy Crystal and Meg Ryan both putting in performances that would define their career. Years later, it remains one of the funniest romantic comedies of all time.

Best Line
“I’ll have what she’s having.”

Father of the Bride

Summary
Getting married is one of the most important parts of a relationship. However, this process doesn’t always go smoothly. This especially true in this comedy. George Banks finds out that his daughter is getting married to someone that she’s only known for three months. Taking an instant dislike to her fiancée George doesn’t want to let his daughter go. While planning the wedding he looks for any chance to break them apart. Along the way, he has to deal with Franck, an eccentric wedding planner causing major budget blowouts. But, when George sees their love is real, he’ll do everything he can to make their dream wedding into a reality.

With a star-studded cast including Diane Keaton, Steve Martin, and Martin Short this film is sure to have you in stitches. But, once the laughter fades, you’re left with a heartwarming story of a father, who needs to learn to let his daughter grow up.


“Frank thought it would be nice to have some swans waddling around the tulip border.”

Summary
There is a huge difference in the way the sexes think. At times, men can find it almost impossible to understand why women are doing the things they are. So, when Nick Marshall, an advertising executive, gets the ability to hear what women think he’s shocked to find that his female colleagues secretly dislike him.  What first seemed like a gift, quickly turns into a curse as he finds that the people in his life don’t enjoy spending time with him. So, he decides to take the opportunity to mend these relationships.

This film pokes fun at the differences between males and females, with hilarious results. But at its core, it’s about learning to listen to other people. The original, starring Mel Gibson, was a box office hit creating a loyal fanbase. So, recently a loose sequel was made. Called What Men Want, it was now a woman who could read male minds.


“It’s never too late to do the right thing.”

Summary
Based on the title, most audience members would know what to expect going into this film. In the end, the sinking does deliver plenty of heart-stopping scenes. After all, director James Cameron has proven that he knows how to film action. But, before any icebergs start to appear, there’s a strong romance bubbling. Rose is due to be married. However, during the voyage, she meets Jack Dawson, and the two fall in love. What neither of them knows is one of the biggest disasters in maritime history is about to unfold.

Audiences around the world adore this movie. With a cast featuring the likes of Leonardo DiCaprio, Kate Winslet, and Kathy Bates there’s a lot of star power in this movie. Also, James Cameron has shown that he understands the formula for making films that audiences will enjoy. For a long time, this was the highest-grossing film of all time.

The Shape of Water

Summary
Director Guillermo del Toro has a long history of surprising cinema fans. Nothing demonstrates this better than The Shape Of Water. Elisa is a janitor in a secret facility. Though she does her job diligently, she’s lonely. One day she meets an amphibious man. The more the two of them talk, the closer they grow. Eventually, she finds herself falling in love with him.

At first glance, a film like this shouldn’t work. But Guillermo del Toro excels at these kinds of stories. In his hands, it feels like a fairy tale. This, combined with the excellent performances from the cast, creates a love story that the audience can believe in. It also won over the critics, getting nominated for several high-profile awards. It even ended up winning the Academy Award for Best Picture in 2018. This movie is proof that love should be based on the contents of the heart, rather than what the person looks like.


“Unable to perceive the shape of you, I find you all around me.”

Summary
Romance films can come in all shapes and sizes. This genre is perfect for exploring difficult ideas. This film is a perfect example of this. Theodore is an introverted writer. He’s also lonely, with no-one outside of work to talk to. So, when he hears of a new AI operating system that could help him write, he decides to purchase it. But he ends up getting more than he bargained for. The system can learn and adapt. As it learns more about him, he starts to fall in love with the AI.

The idea of a man falling in love with his computer shouldn’t work. But, in this case, it does. Joaquim Phoenix does a great job in the title role, showing us the complex emotions that come with the situation. Another standout performer is Scarlett Johannsson, who plays the AI. Though it might be a little strange, this movie shows that love can come in many forms.


“I’m different from you. That doesn’t make me love you any less.”

Summary
While this film never managed to win over the critics, audiences love it, and quickly became a box office success. Kevin Costner plays Frank, who’s a former secret service agent. He’s hired to protect a pop diva, who fears that a fan will attack her. While they initially disagree about his rigid security protocols, she eventually begins to trust him. Frank, begins to view her as a lover, rather than a client.

Though Kevin Costner has had a long and successful career in the movie industry, the real star of the show is Whitney Houston. Or, more specifically, her music. This film features some of her most iconic songs, including I Will Always Love You. The iconic soundtrack is part of the reason why this film continues to be a fan favorite, years after it first hit cinemas. Since it was released, the film has been re-interpreted in many ways. Today, you can even go see a Broadway version of the show.

#MmmHmmmm
So tell us in the comments, what are YOUR best romantic movies ever that we missed?
(Cough, Dirty Dancing, Cough…)

Don’t miss our other Best Movies Ever features: