How to Communicate Better

How to Communicate Better

Learning how to communicate better is not something you need to work on at the beginning of your relationships. Every romantic relationship starts with the well-known honeymoon phase. This is the phase where you and your partner are enjoying the novelty and excitement of young love. Everything your partner does or says seems perfect in your eyes. You simply see no flaws. That is until the honeymoon phase wears off and you start to get to know each other on a much deeper level.

Suddenly, you are able to see your partner fully, with flaws and all. Some people might think that the honeymoon phase’s ending is a bad thing, but actually, it’s the opposite. It is from that moment onwards that the relationship can become truly meaningful and support personal growth.

But it is also with the ending of the honeymoon phase that conflicts tend to arise. You might find yourself more easily annoyed or even angry with the way your partner behaves. Conflicts aren’t necessarily a bad thing. Even the best relationships have to deal with conflict every now and then.

Conflict is healthy and an opportunity for growth and mutual understanding. It isn’t the conflicts that can kill a good relationship, but how you manage them as a couple. The key to navigating relationship conflicts healthily and sustainably is responsible communication. 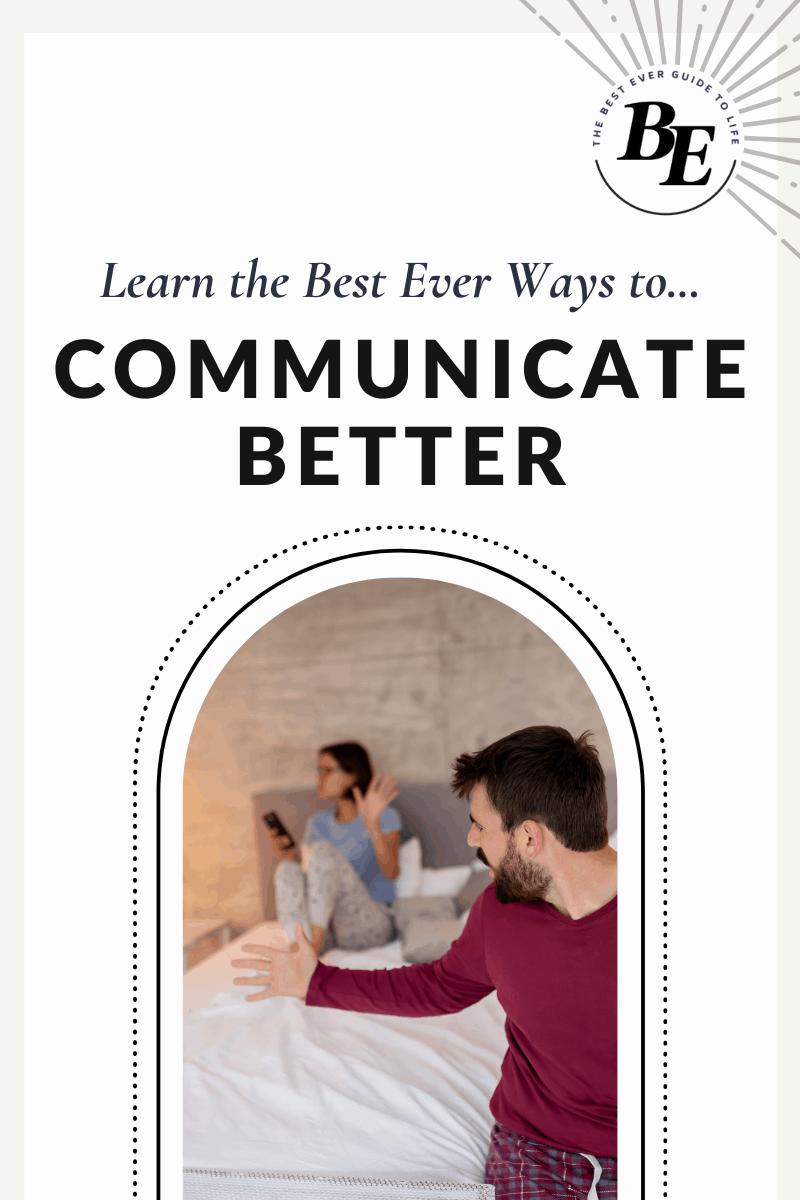 How to Communicate Better: The Four Horsemen

Psychologist Dr. John Gottman from the Gottman Institute has studied relationships for over 40 years. In his research, he discovered four key characteristics that significantly predict the failure of marriages and romantic partnerships. He has dubbed these characteristics “The Four Horsemen.”

They tend to come out in almost every relationship and can cause real damage over time. But there are ways to counteract these notorious Four Horsemen when they come up in conflicts. These are the so-called antidotes you can learn to use when you notice any of these destructive characteristics: 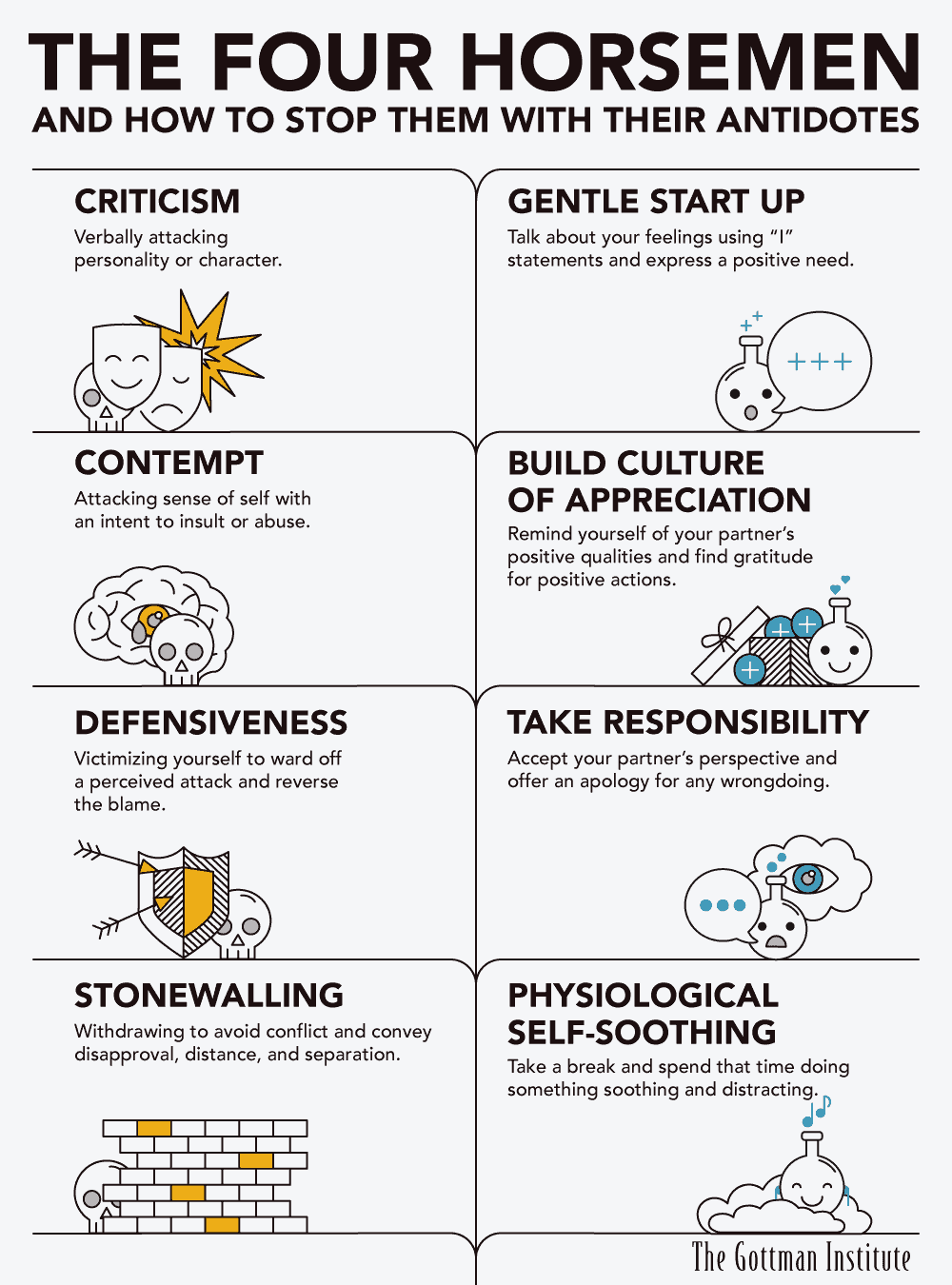 Shared With Permission from The Gottman Institute

1. Gentle Start-Up: The Antidote to Criticism

Criticism can be lethal because through criticizing, you don’t just disapprove of someone’s behavior; you actively attack who they are. Blaming and making someone wrong will only lead to disconnection and drag you further from conflict resolution. But with this antidote to criticism, you can learn to complain without blame.

The way to do this is to use ‘I’ statements when talking about your feelings and express what your needs are. To explore this within you, simply ask yourself the following questions:

What do I feel?

What do I need?

Once you figured out what you feel and need, you can make a request.

Here is an example of criticism: “You are always late. You don’t care about me or my time.“

Instead, try saying something like: “When you are late for our appointment, I feel upset and judge that you don’t value my time. Could you try to be more punctual next time?“

The first statement is hurtful because the other person is made wrong. In contrast, the second statement is much more conducive to conflict resolution and can therefore create more connection and intimacy, rather than the opposite.

2. Build a Culture of Appreciation: The Antidote to Contempt

Contempt is not a pretty emotion. It makes a person feel like they are better than the other person. By using put-downs, sarcasm, eye-rolling, mockery, etc., someone tries to assert moral superiority over the other person.

Contempt can create even greater damage to a relationship than criticism. It can create a seriously unsustainable culture and should be unlearned as a pattern at all costs if you truly care about your partner and the relationship.

Instead, practice building a culture of appreciation. You can do this by expressing gratitude, appreciation, and affection on a regular basis. If you catch yourself in a contemptuous train of thought about your partner, try to remind yourself of all the positive things they have done that brought you joy or ease. And share them with your partner, so they can feel appreciated for even the smallest things by you.

3. Take Responsibility: The Antidote to Defensiveness

In the face of contempt, blame, or personal attacks, it’s easy to feel defensive. But when defensiveness comes up as a pattern too frequently, even when someone is just trying to give feedback or express how certain behavior makes them feel, then it can become a serious relationship issue. By being defensive, you are basically catching the ball of criticism and throwing it back to your partner. “You are the problem, not me.” Unhealthy defensiveness can look like constantly trying to justify or make excuses.

Instead of going into defense mode, try taking responsibility instead and seeing the situation from your partner’s perspective. This takes emotional maturity and can be difficult at first, especially for the ego. But practice is key, and it will benefit the relationship (and your own sense of self-worth) in the long run.

4. Physiological Self-Soothing: The Antidote to Stonewalling

When one or both partners choose to shut down and withdraw from the discussion, that is called “stonewalling.” Stonewalling happens when one feels overwhelmed by emotions and simply loses the ability to engage in the discussion. This is a classic, but dysfunctional coping mechanism, because it makes communication impossible.

The antidote to stonewalling is physiological self-soothing. When one or both partners feel too overwhelmed to engage, they simply acknowledge that they feel overwhelmed and ask to take a break. During this break, both couples can do something for themselves that can help them calm their nervous systems down. This could be listening to music or taking a short walk around the block for some fresh air.

Be careful with assumptions

To make sure that these Four Horsemen don’t ruin your relationship, you don’t need to become hyper-vigilant. But it is important for both partners to raise awareness and recognize the red flags in time, so healthy communication and conflict management are possible. Especially when they come up in the same old fights that you’re sick of having. If you notice yourself judging your partner or making them wrong based on assumption, it’s important to check in with yourself what your assumptions are based on. Communicate these assumptions by taking responsibility for them, and trust that your partner isn’t doing the things that bother you to deliberately hurt or disrespect you.

The Art of Listening

Healthy and effective communication takes skill, but so does active listening. These two skills go hand in hand. A typical communication model involves a sender, a receiver, and a message which is encoded verbally or non-verbally by the sender and decoded by the receiver. To be able to decode a verbal message, the receiver’s task is to listen.

To practice this, you and your partner can try the following exercise:

The one thing we have to keep in mind is this: conflict doesn’t make a relationship bad, as long as it is managed well. When conflict arises, couples should focus on repair rather than inflicting more damage. Responsible communication and active listening are key skills to build trust, understanding, and connection in every relationship.