Slow cooker beef Stroganoff is a real family pleaser that is loaded with big chunks of fork tender beef served in a creamy mushroom sauce over tender egg noodles. This delicious easy to prepare comfort food has become a family favorite and a staple around our kitchen table. 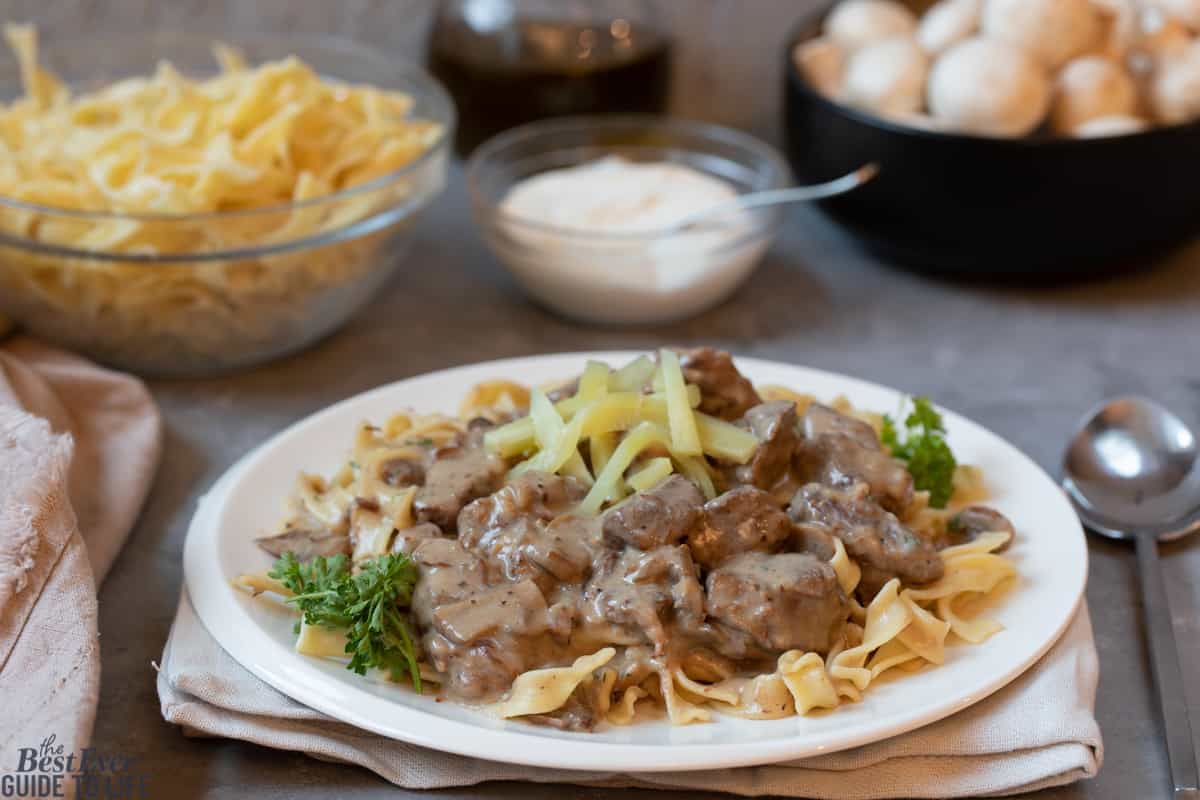 Michelle makes a delicious version of the classic stovetop beef Stroganoff using tender cuts of steak. But lately, we’ve preferred to make our slow cooker version of the recipe that uses tougher less expensive cuts of beef which are packed full of flavor.

I find that the more expensive cuts of meat are tender and take less time to cook, but lack that really robust beefy flavor that comes from tougher cuts of meat such as a chuck roast. The meat takes longer to cook and tenderize, but this just allows more time to develop that rich and savory sauce. 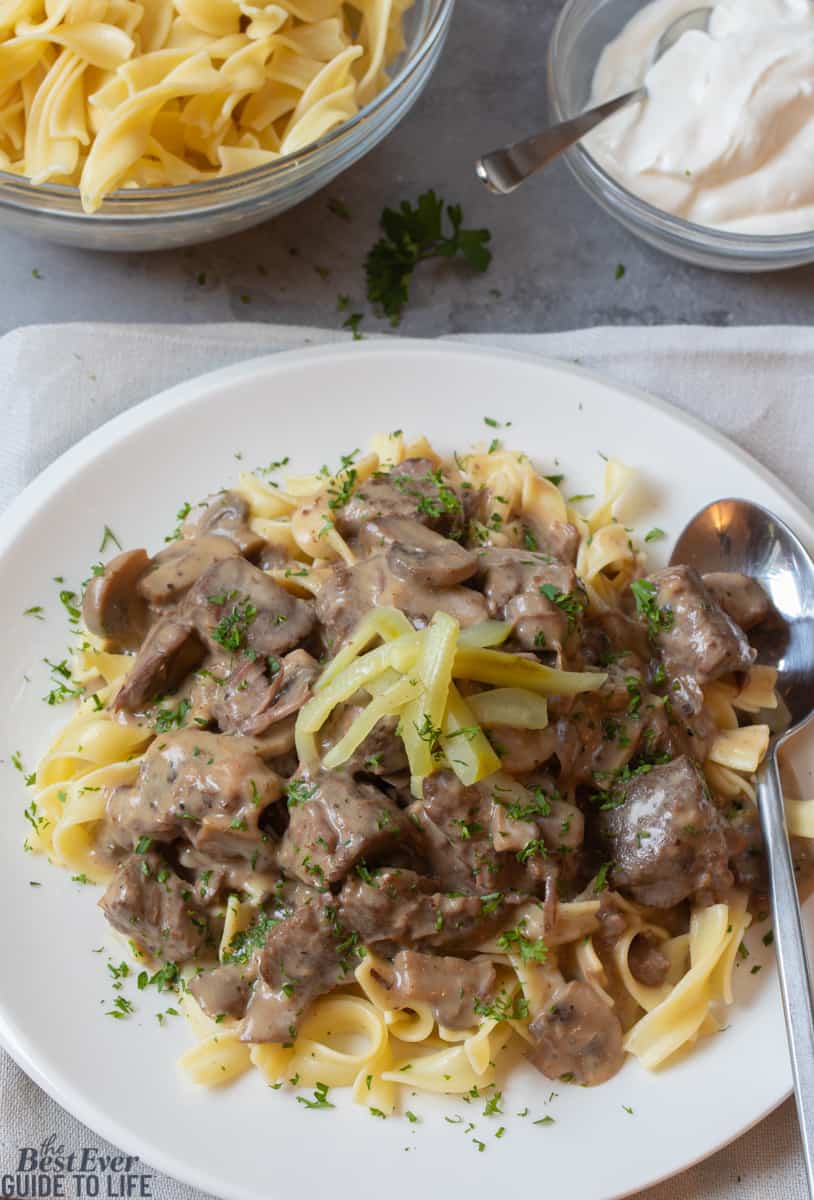 The slow cooker version of beef Stroganoff is so convenient and easy to prepare. You just have to place the browned beef and braising liquid into the slow cooker. Then put the cover on it, set the temperature, and go about your daily business, while the slow cooker works its magic.

Returning home to the amazing smells of succulent beef braising slowly in a mushroom sauce with brandy and dijon mustard is absolutely heavenly. From the moment that I walk through the door, I’m instantly hungary and can’t wait to sit down with the family and enjoy this incredible meal.

Beef stroganoff originated in Russia, and the first known account of the recipe was from a popular Russian cookbook published in 1871. From its creation in Russia, beef Stroganoff has become a very popular dish around the world with many different variations. The original recipe was made with seasoned beef cubes sauteed in butter. The beef was added to a simple sauce made of broth and mustard thickened with a roux and finished with sour cream.

A commonly prepared version of beef Stroganoff served in North America today includes tender strips of beef steak added to a sauce made with beef broth, dijon mustard, onions, and mushrooms that’s thickened with a roux or cornstarch and finished with sour cream. The Stroganoff is then served over rice or short pasta, such as egg noodles.

What Are Some Variations Of Beef Stroganoff?

There are two different cooking methods used to prepare beef Stroganoff. The first is the classic version. Tender strips of beef are browned in a skillet and set aside. The skillet is then used to prepare the sauce. The meat is mixed back into the sauce and finished with sour cream.

This is the quickest cooking method and uses tender cuts of beef that do not require a long cooking time such as ribeye, top sirloin, and tenderloin steak. The classic beef Stroganoff is a great option if you are short on time, but the beef is a little more expensive.

The second cooking method is the slow cooker or (braising method). This method uses tougher cuts of meat typically from the front shoulder that require longer cooking times to break down the connective tissue in the meat and make it tender.

The best cut of meat for slow cooker beef Stroganoff is the chuck roast. Precut stew meat from your local grocer is convenient but can be inconsistent. Occasionally, the butcher will mix chuck in leaner cuts resulting in some dry and tougher pieces of meat.

The chuck is browned in a thick-bottomed pot and then transferred to the slow cooker. The pot is then used to prepare the sauce or braising liquid. The sauce is added to the slow cooker with the beef and simmered low and slow for 5 hours on high or 8 hours on low. The Stroganoff is finished by tempering the sour cream and mixing it into the sauce.

I prefer the slow cooker method. I love the moist fork-tender beef produced by braising the meat, and the sauce is rich and full of body.

Some recipes use cream cheese instead of sour cream, or they may include both. Other popular ingredients that may be included in the sauce are Worcheshire sauce, onion and garlic powder, Italian seasoning, and red wine. Some recipes even call for ground beef in the classic version of beef Stroganoff.

I prefer to use a roux as my thickening agent, because of the slightly nutty flavor and smooth texture that it gives to the sauce. Other popular thickening agents include a slurry made with cornstarch and water, or a white wash made with flour and water. 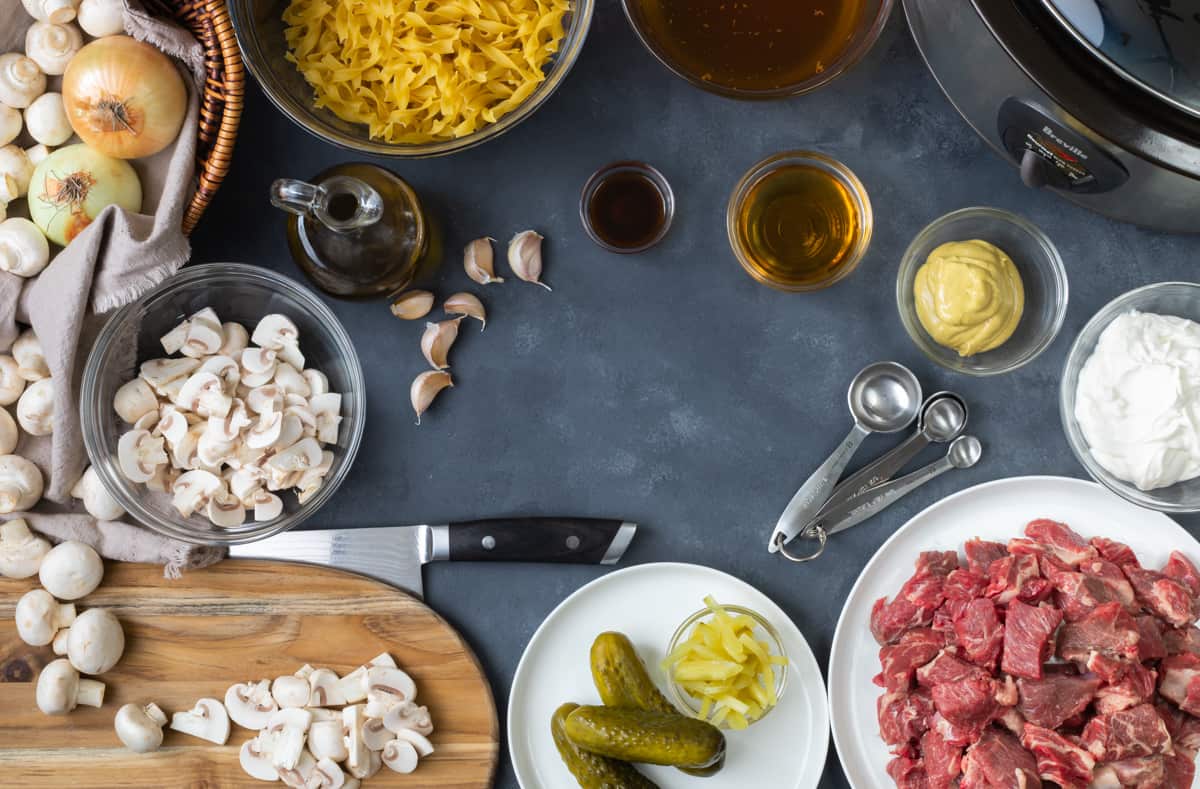 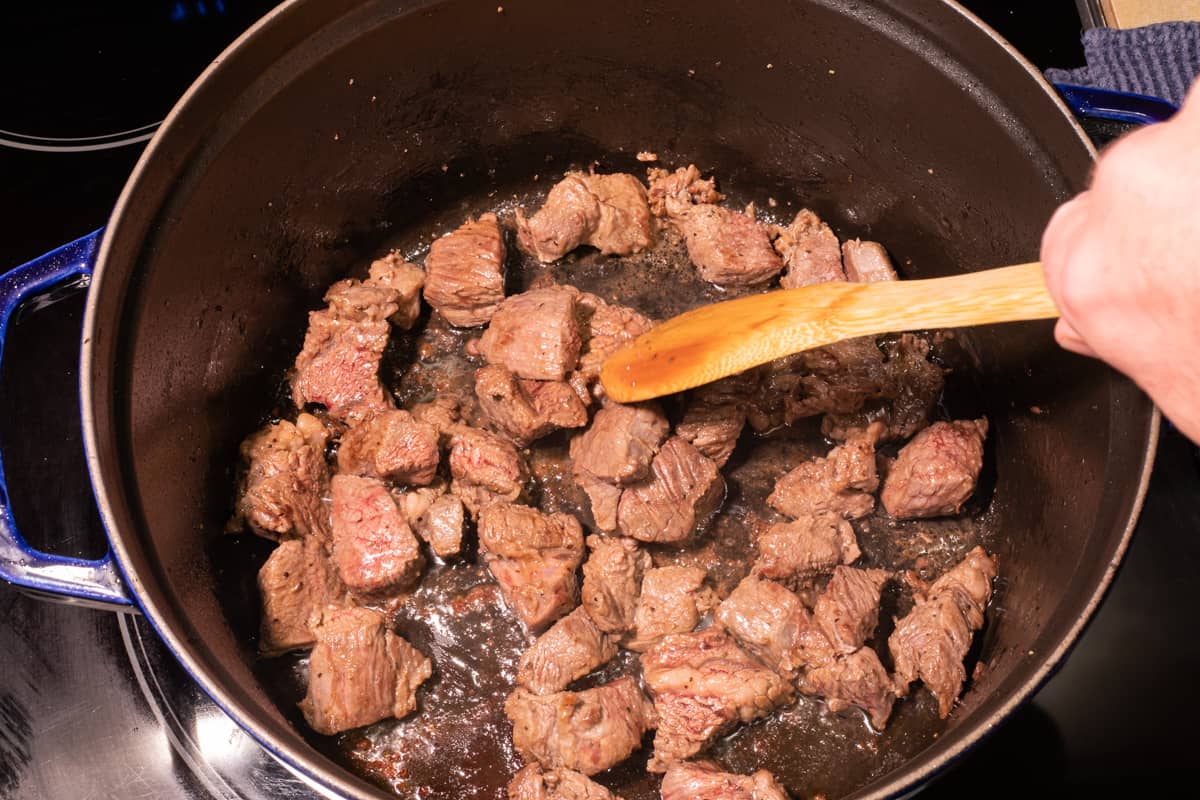 Cut the chuck roast into 1 to 1 ½ inch cubes. Trim away any excess pieces of fat. Lay the beef out on a baking tray and season with 1 tsp salt and 1 tsp pepper.

Add 1 tbsp of olive oil to a thick bottom pot over medium-high heat, until the oil just starts to smoke. Add the beef in small batches trying not to overcrowd the bottom of the pot. Stir the meat frequently browning on all sides.

Step 3: Cook The Onions And Deglaze 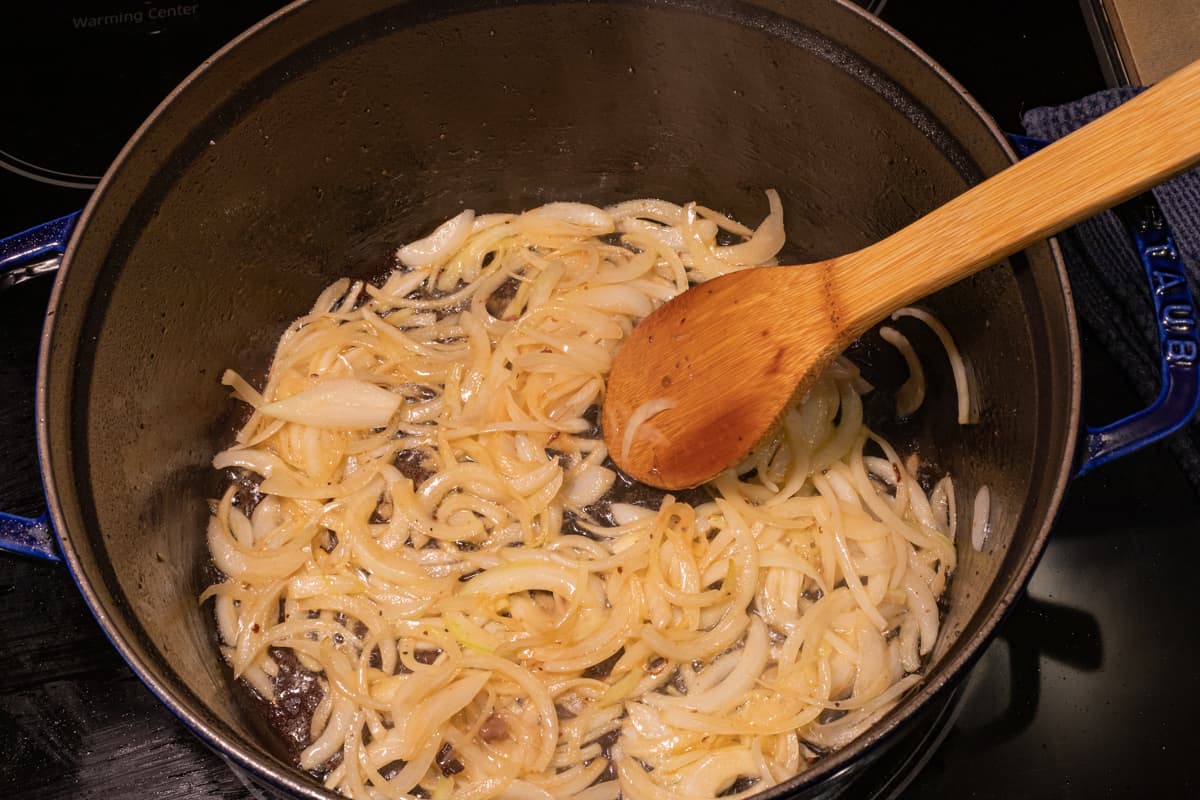 Remove the pot from the burner and add the butter. Once the butter has melted, return the pot to the burner over medium heat. Stir in the onions and cook for 3-4 minutes, until they are soft and just starting to caramelize. Add the garlic and continue to cook for another minute.

Deglaze with brandy and scrape the bottom of the pot to help lift any caramelized food bits. These little food bits will dissolve into the sauce during the process adding more flavor to the Stroganoff.

Step 4: Add The Flour And Liquid To Form The Sauce 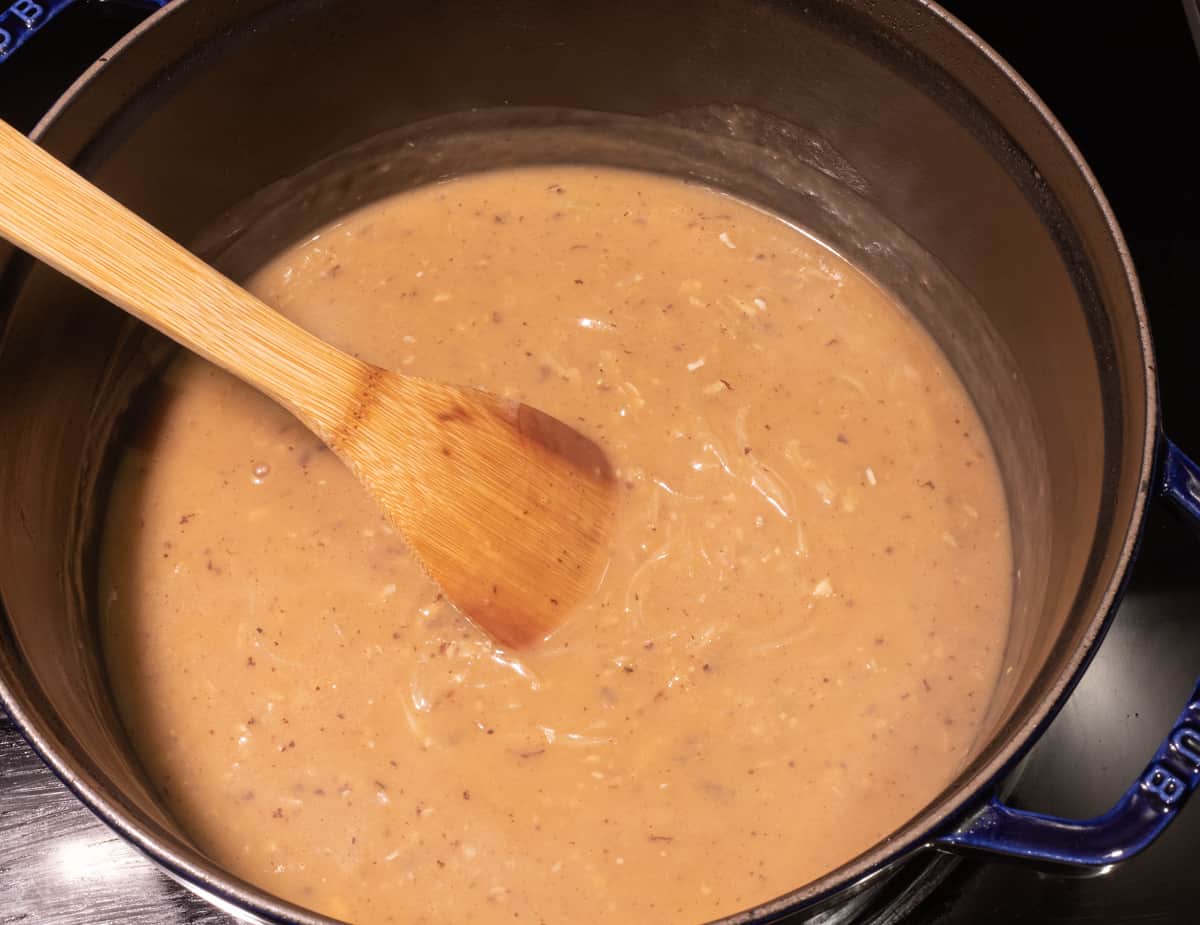 Step 5: Cook The Stroganoff And Serve 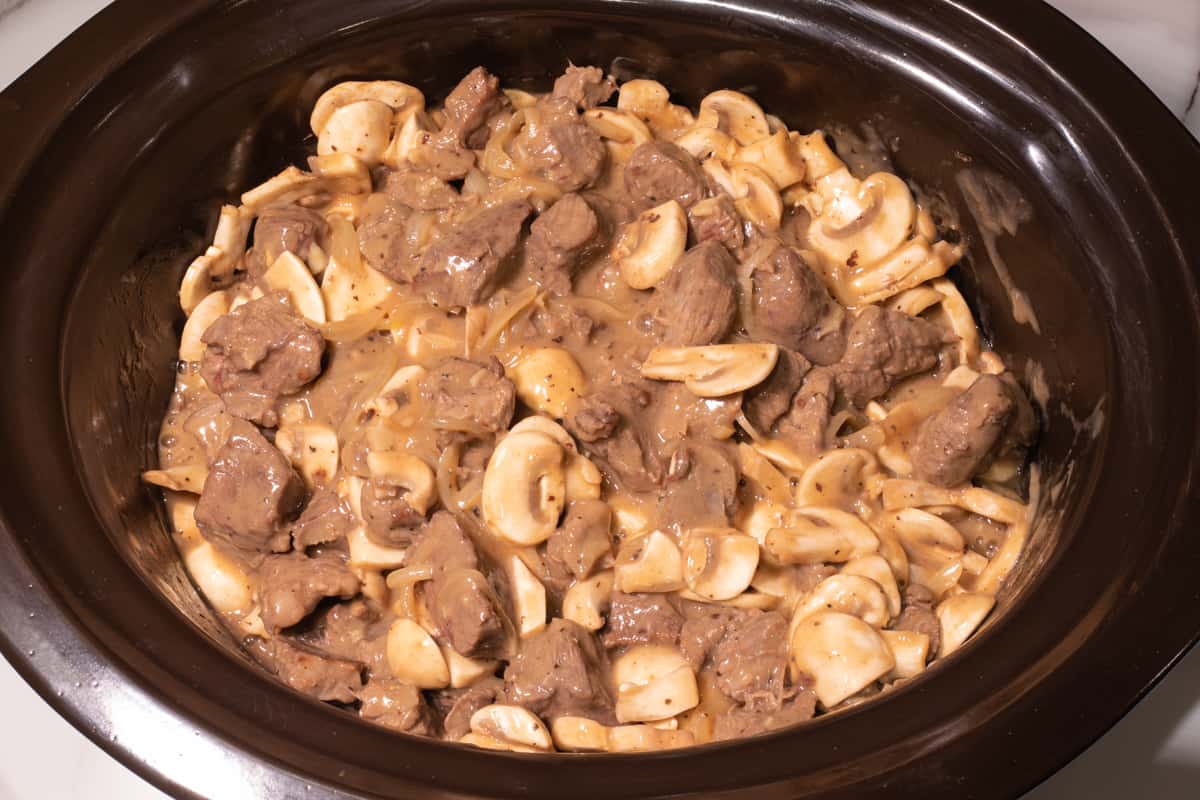 Transfer the Stroganoff to the slow cooker, and stir in with the beef. Add the mushrooms and stir until combined. Cover and cook on high for 5 hours, or on low for 8 hours. The Stroganoff is complete when the beef is moist and tender. 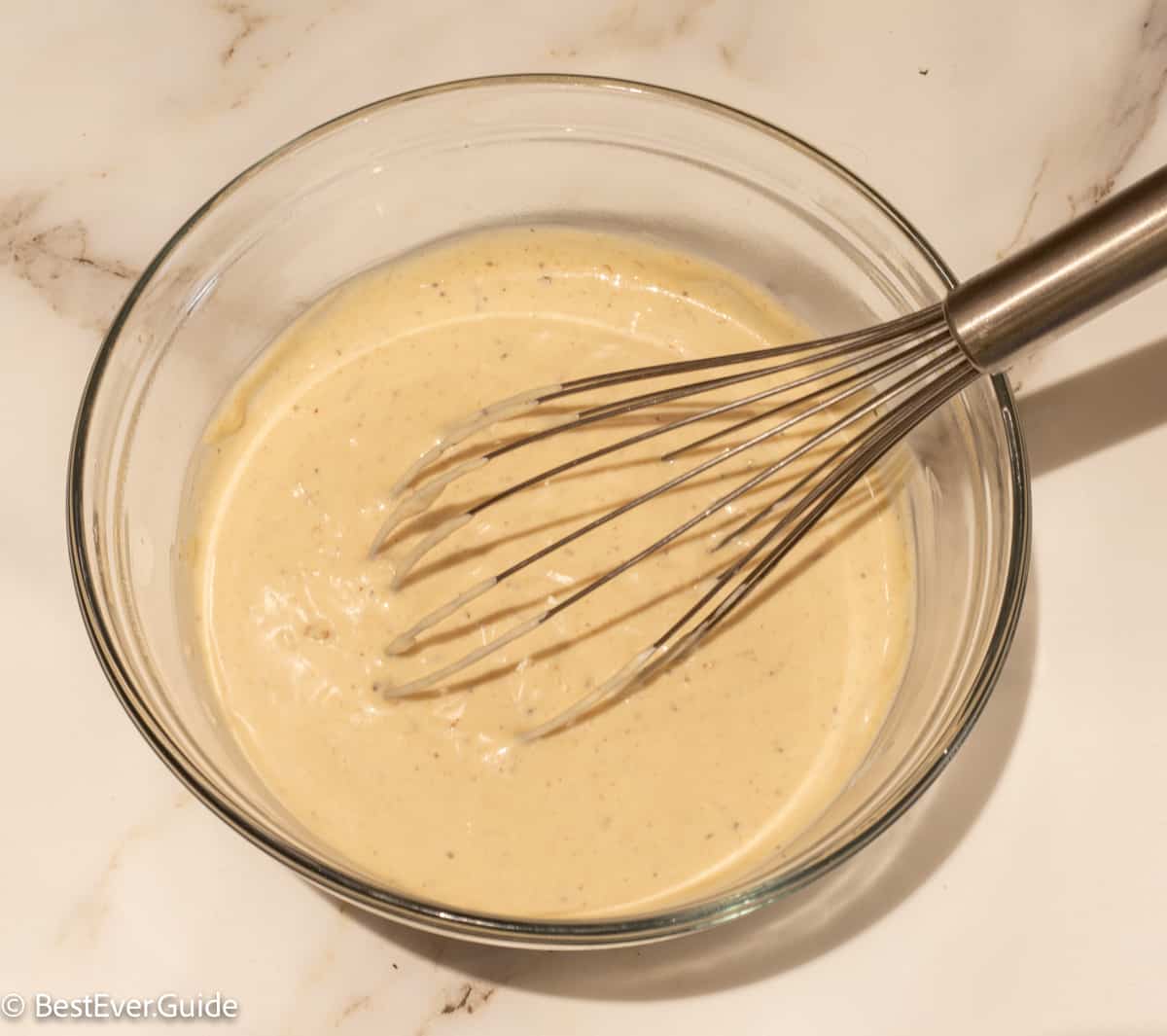 Place the sour cream in a bowl and add 2 cups of the Stroganoff sauce to the bowl. Whisk the sauce and the sour cream until smooth and well combined. This will temper the sour cream and prevent it from curdling when added to the hot stroganoff.

The Stroganoff beef is very tender, so you want to avoid over mixing the sauce and inadvertently breaking up the beef. Tempering the sour cream also dilutes it making it quicker and easier to incorporate into the sauce. 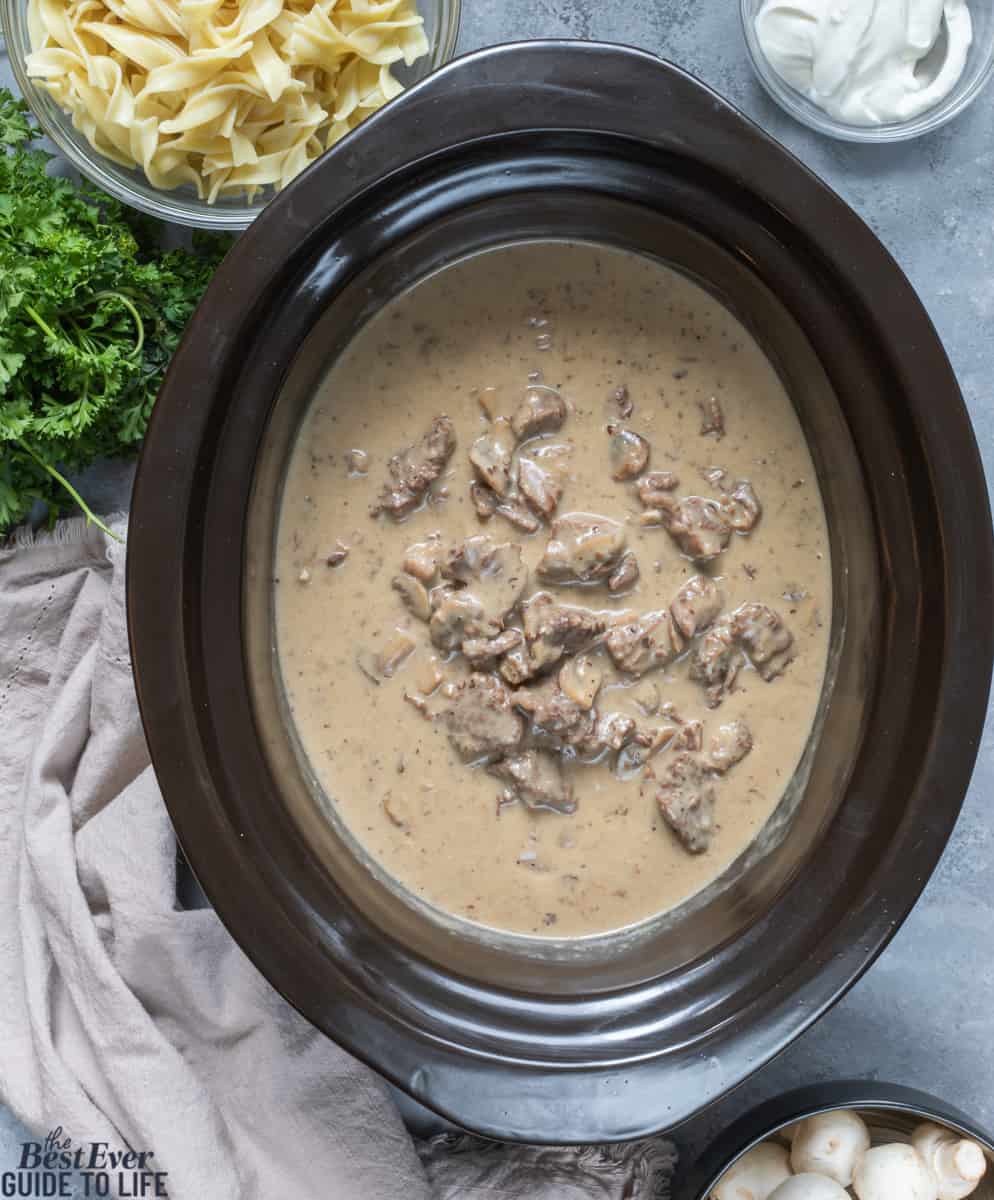 Finish by gently stirring the sour cream mixture into the Stroganoff until combined. Serve over egg noodles and garnish with julienned pickles.

How To Store Stroganoff

Refrigerate leftover Stroganoff in an airtight container for up to 4 days. Cool the Stroganoff completely before refrigerating and avoid leaving at room temperature for more than a couple of hours. I prefer to refrigerate the noodles in a separate container from the Stroganoff sauce. The noodles absorb the sauce, swell up, and become mushy giving them an unpleasant texture.

Freezing Stroganoff, if you are planning on freezing the Stroganoff, do not add the sour cream to the sauce. The sour cream does not freeze well and has a graining unpleasant texture when thawed. It also has a tendency to separate or break when reheated.

Let the meat sauce cool completely and transfer to an airtight container or freezer bag. Squeeze out all the air from the plastic bag or container and freeze for up to 3 months. Label your containers to keep track of their expiry.

Thaw the frozen Stroganoff in the refrigerator. Transfer the Stroganoff to a pot and reheat over medium heat stirring occasionally until warm, and finish the Stroganoff with sour cream.