Best Ever Recipe for Blackening Seasoning

Best Ever Recipe for Blackening Seasoning

This is my best ever recipe for blackening seasoning. I have played with several different variations of the recipe over the years, and this is the best one yet. Use this flavorful blackening seasoning recipe on your favorite fish, chicken, and beef. Elevate your meats, and take it to the next level by blackening them. Blackening seasoning is widely available in stores, but they just don’t compare to a freshly ground homemade recipe. 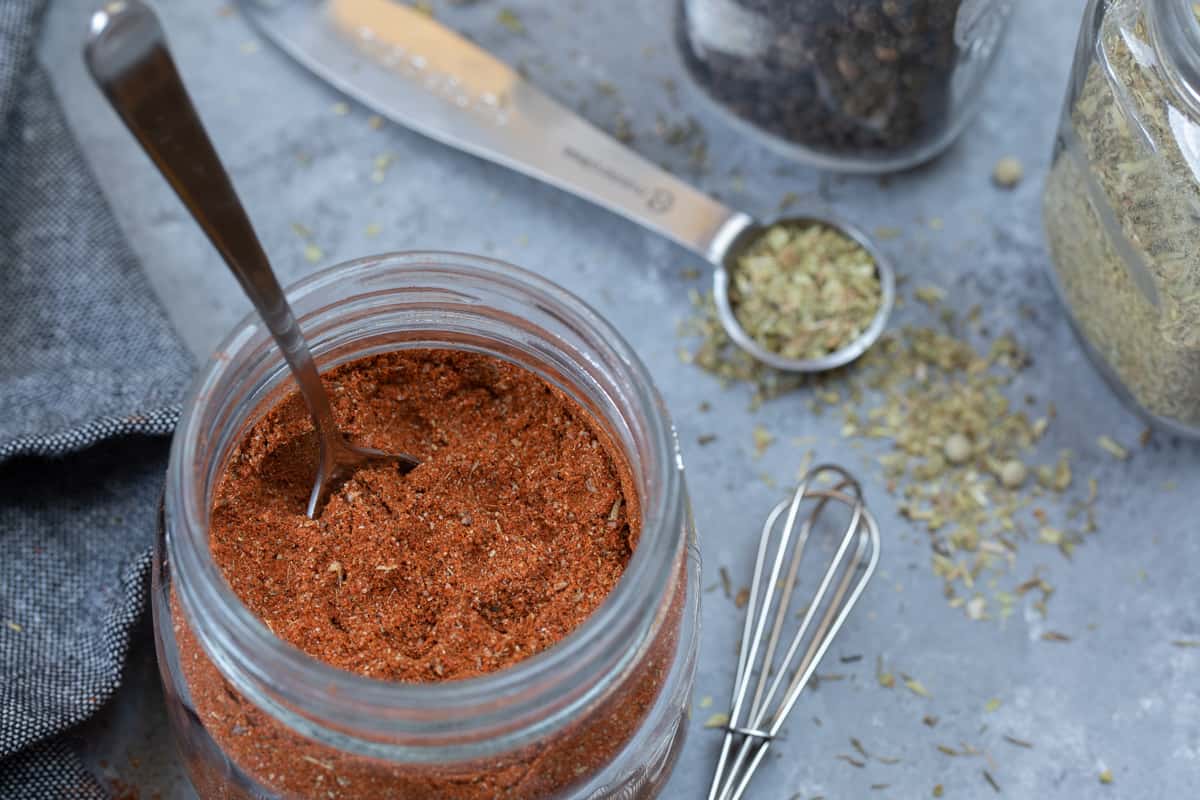 What Does Blackening Mean?

Blackening is a cooking technique whereby a protein (originally fish) is brushed with butter and dredged in a mixture of ground herbs and spices that is then seared over high heat in a cast iron skillet. The combination of blackening seasonings and butter cooked over high heat gives the food its signature dark appearance and amazing flavor. Blackened foods develop a dark flavorful crust with herbal undertones and a bit of heat.

The Origins of Blackening Seasoning

What is in the Recipe for Blackening Seasoning? 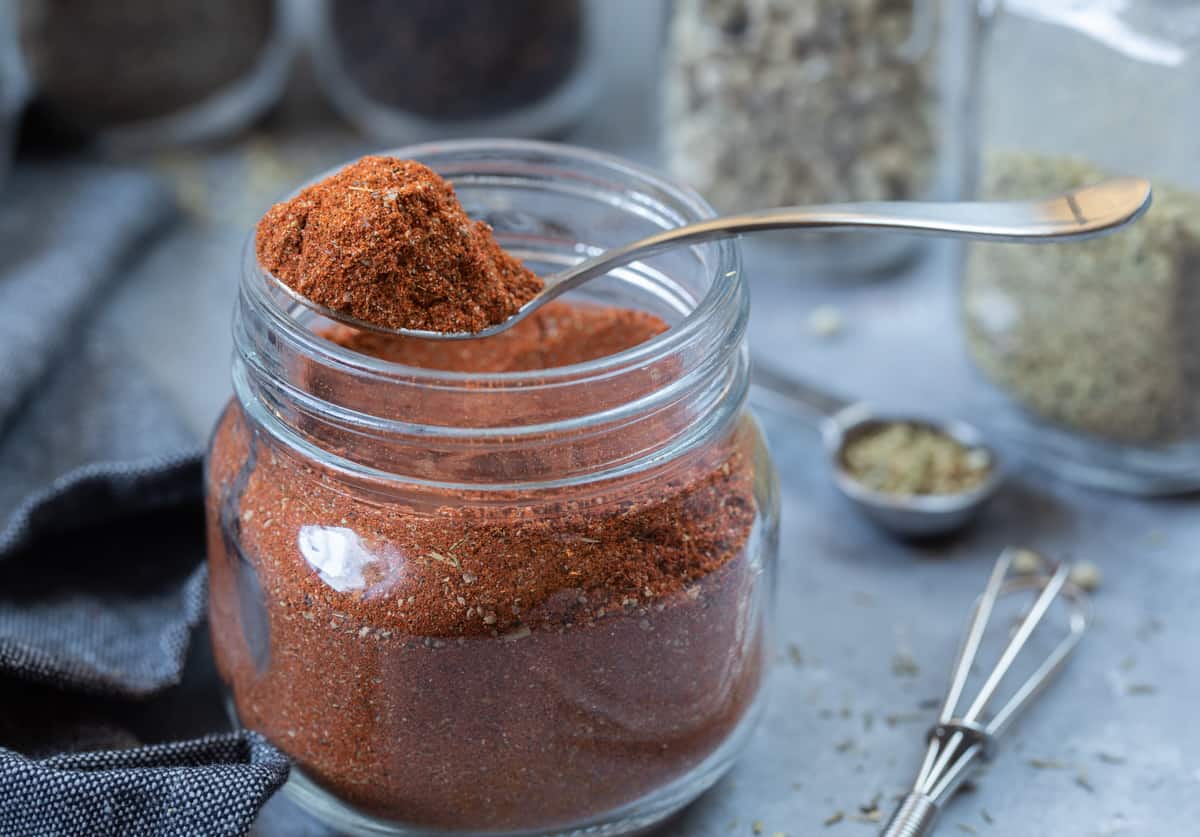 Blackening seasoning is a blend of herbs and spices. A typical recipe is made with paprika, garlic and onion powder, dried thyme and oregano, ground black pepper, salt, and cayenne pepper.

There are many different variations of this recipe that may include herbs such as basil and parsley. Other cooks may prefer a spicier version, and kick it up with crushed chillies or other dried hot peppers. If you prefer blackening seasoning to have a smokier flavor, try substituting smoked paprika for paprika, or add a pinch of cumin to the recipe.

I personally enjoy the additional heat and flavor that comes from adding white peppercorns to my version of the recipe. Customize your own blackening seasoning blend by adjusting the ratios or by adding and subtracting ingredients to suit your taste.

How to Make Blackening Seasoning 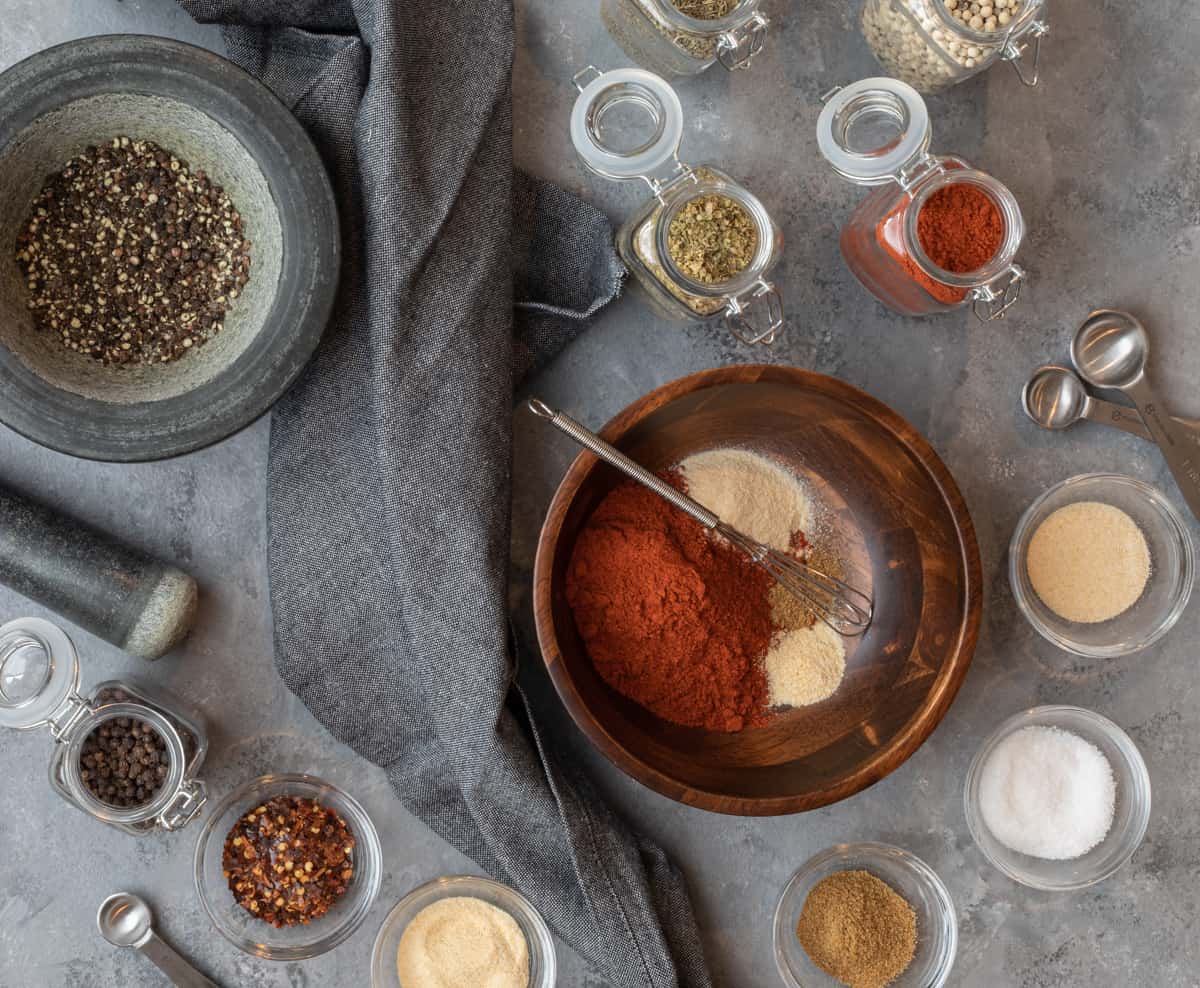 Use a mortar and pestle to grind the peppercorns, salt, thyme, oregano, and red pepper flakes individually. I have found that grinding each ingredient separately allows the herbs and spice to grind quicker and more evenly. Grind each of these ingredients into a fine powder, and then add them to a mixing bowl.

I have found that by grinding these ingredients, it develops a more aromatic and intense blackening blend. Grinding also breaks down the herbs and spices providing a finer blend that is easier to evenly apply to the protein. 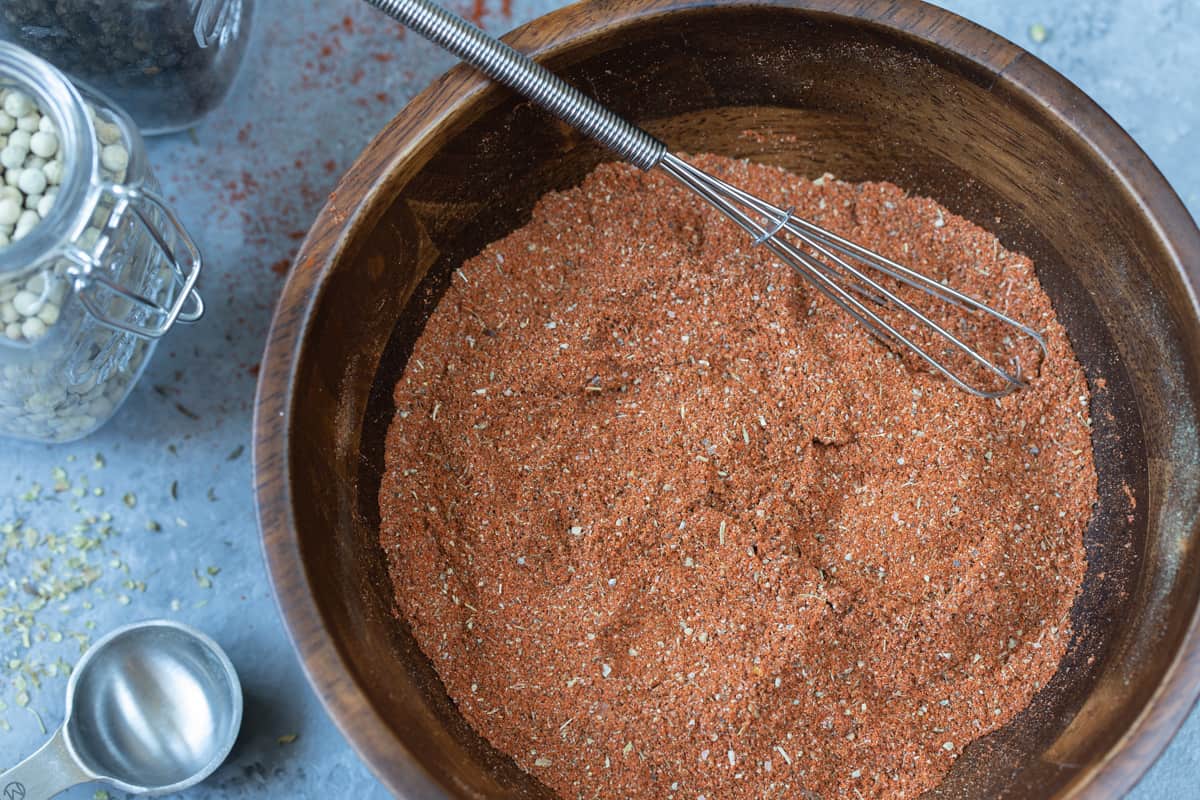 Add the paprika, garlic powder, onion powder, and cumin to the mixing bowl. Mix the blackening seasoning with a whisk until well combined.

Step 3: How To Store Blackening Seasoning

Store blackening seasoning in a sealed airtight container that is in a cool dry place. The blackening season will last 1-2 years, but this will vary based on the age of the herbs and spices used in the recipe. Try not to make too much at one time, because the potency of the seasoning will start to decline after approximately 3-4 months. 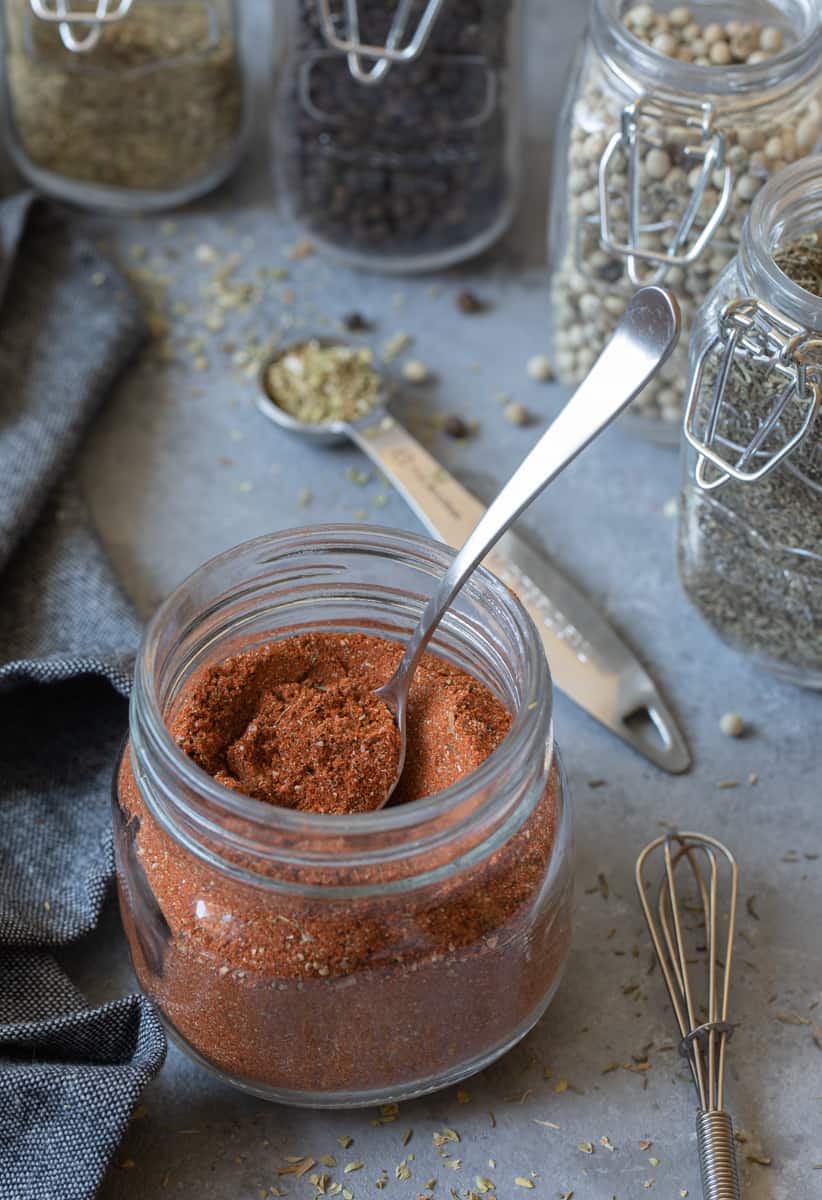 Blackening seasoning is quick and easy to prepare, and a must-have spice blend that brings an amazing bold and spicy flavor to your favorite seafood and meats. Personalize it by adjusting the recipe ratios to develop your best ever blackening seasoning recipe. For example, these recipe proportions are perfect for Michelle and others we have served, but I prefer it a bit spicier. I add more red pepper flakes to make it a little hotter. 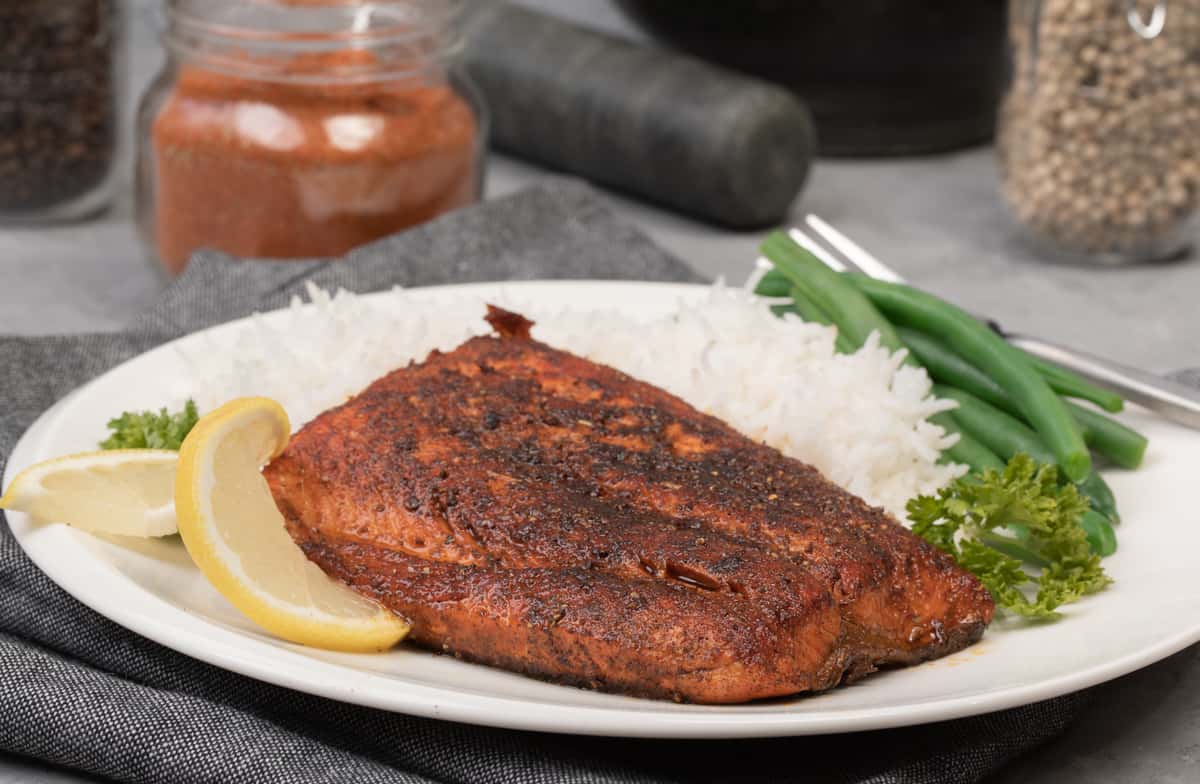 For additional heat, add 1/2 a teaspoon of cayenne pepper to the recipe.

Our founder, Steve brings his experience as a Red Seal Chef to our Best Ever Food channel. Learn more about Steve here…