This creamy and delicious homemade cream of mushroom soup recipe is packed full of flavor featuring a mixture of crimini and shiitake mushrooms developing a rich and savory soup with a hint of sherry that will leave you never wanting that store-bought canned version ever again. 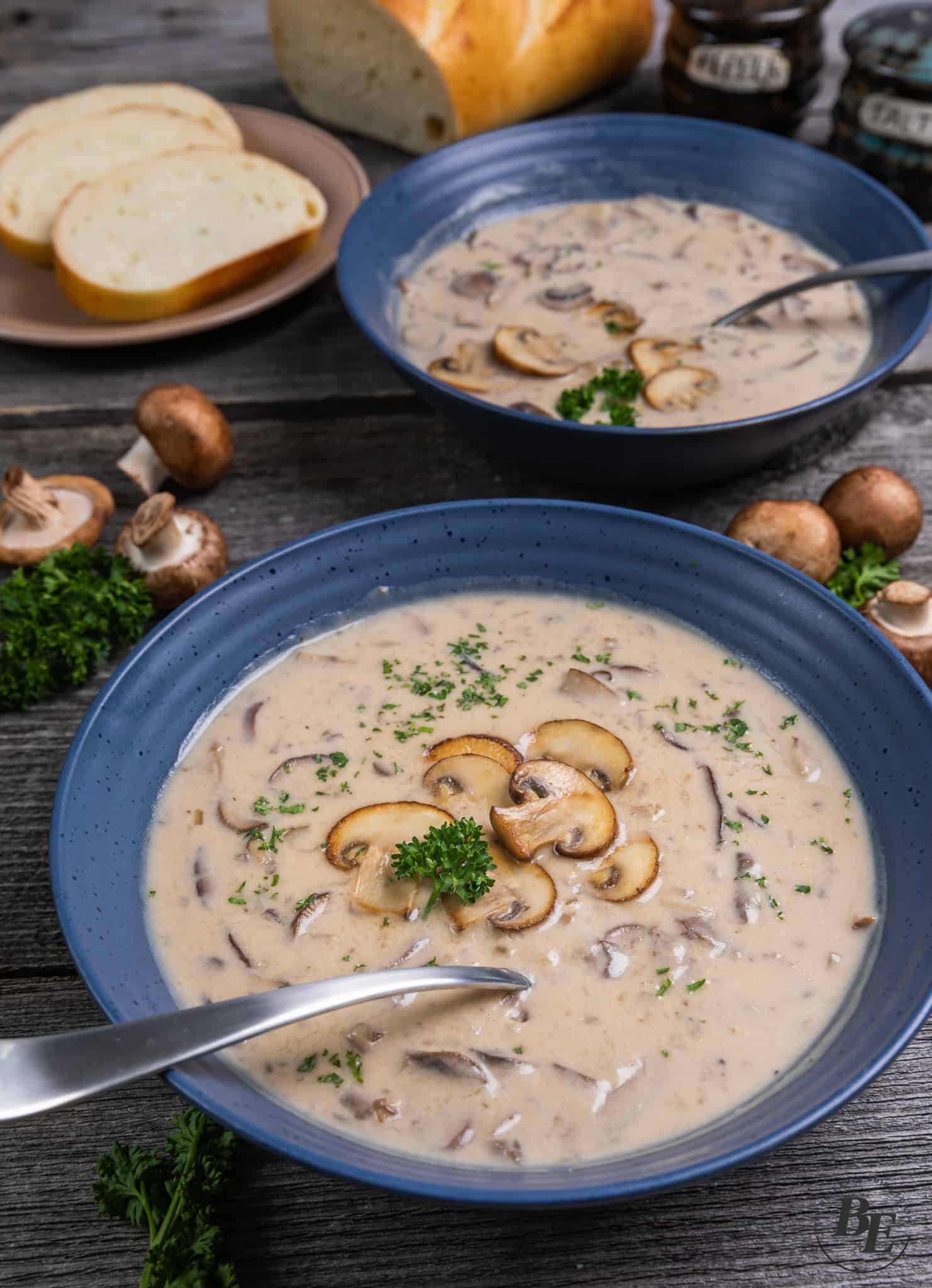 I grew up on the canned version of cream of mushroom soup, and to be honest, it was my favorite soup. But after having the homemade version, there is just no comparison. Homemade cream of mushroom soup is so delicious with that amazing fresh mushroom flavor infused into the soup to create an earthy and savory flavor that really wakes up those umami taste buds.

The savory flavors of the mushrooms marry perfectly with the onions, garlic, sherry, and cream to produce a rich and creamy soup that keeps you coming back for more. The soup is so easy to make, and most of the ingredients may already be in your kitchen. It will make an excellent starter at your next family meal, or the perfect light lunch with toasted garlic bread to mop up every last drop of this amazing soup. 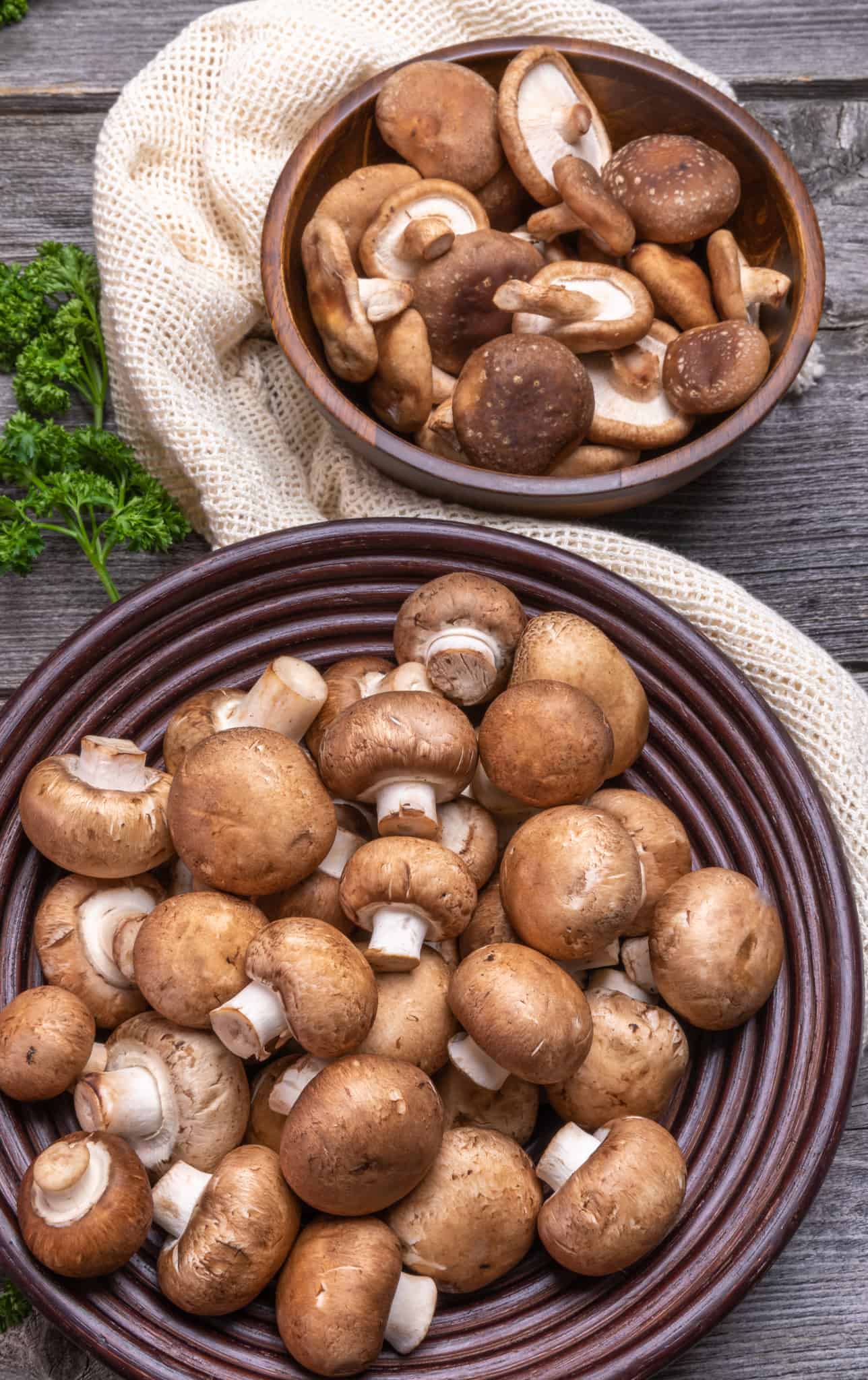 Any combination of your favorite mushrooms will work for the soup. Each variety of mushroom offers its own unique taste, texture, and color to the soup. Have fun with this recipe and personalize it with your own preferred mushroom flavor and texture combination. I prefer to use a combination of cremini and shiitake mushrooms for my cream of mushroom soup recipe. I really enjoy the deeper earthy flavors and meaty texture that comes from this mushroom combination.

How To Make Cream of Mushroom Soup 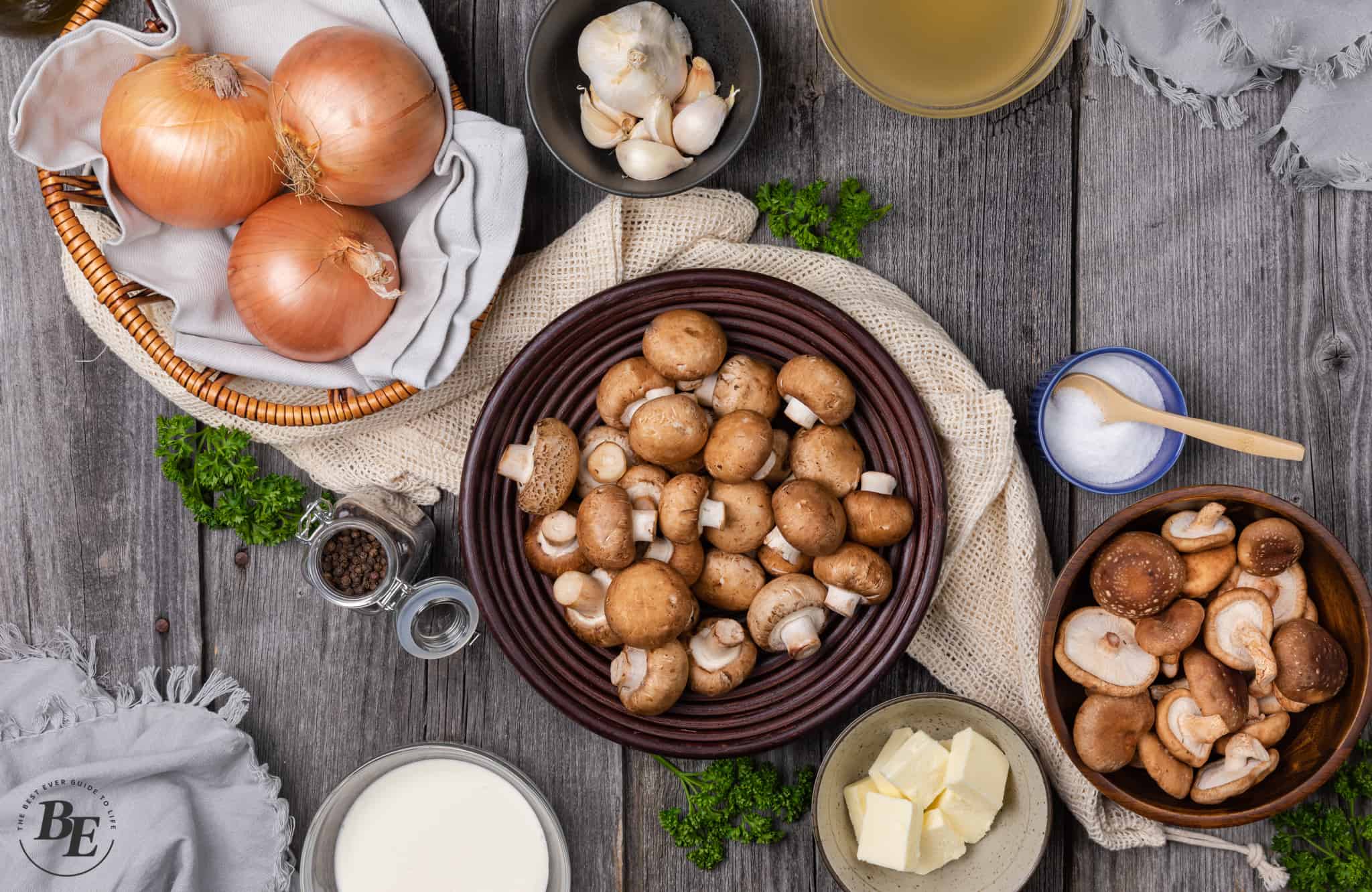 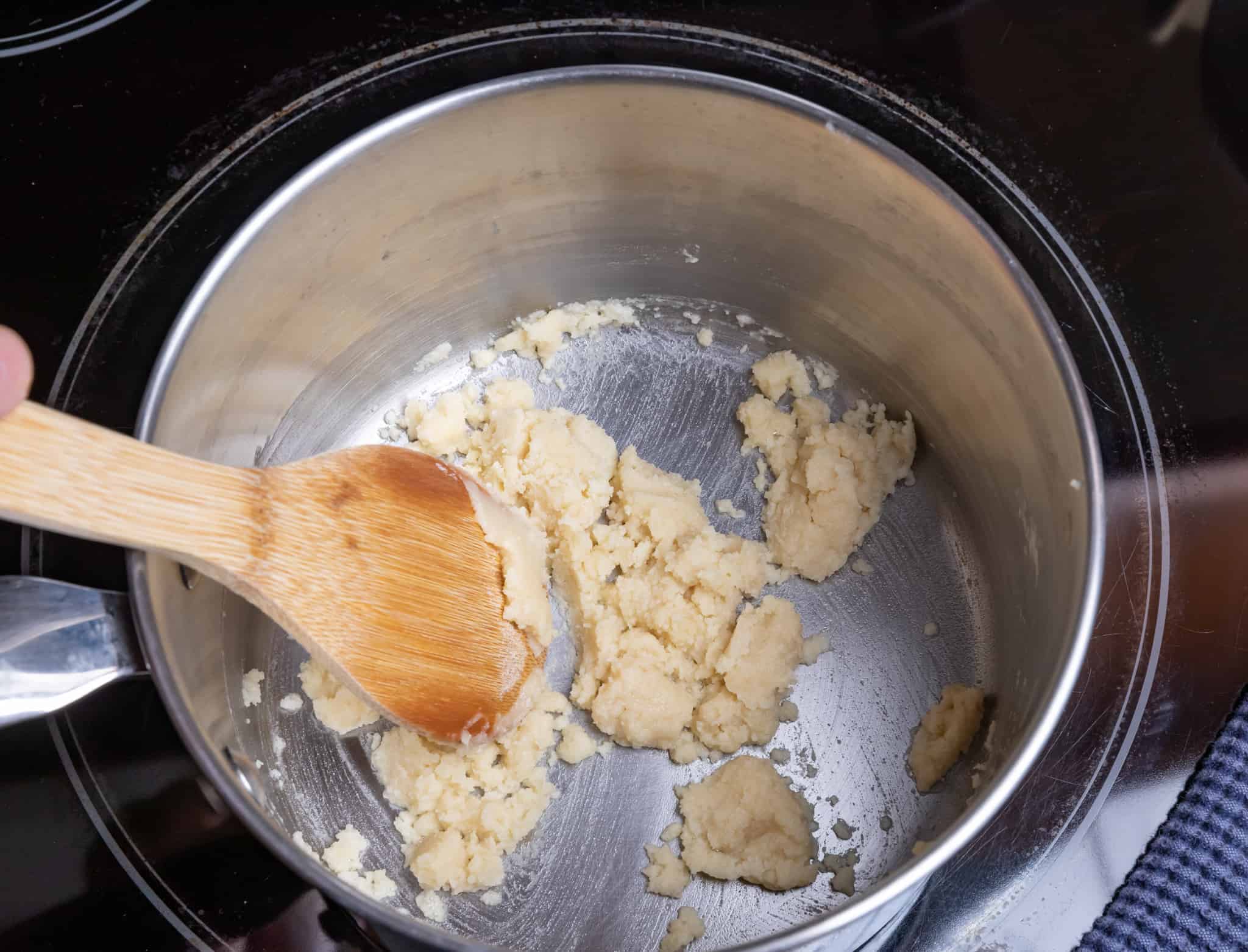 Melt the butter in a medium-sized saucepan over medium-low heat. Mix in the flour to form a roux. Stir the roux frequently for even cooking, and prevent the roux from burning. Cook for 5-6 minutes until it has a light brown appearance and a nutty aroma. 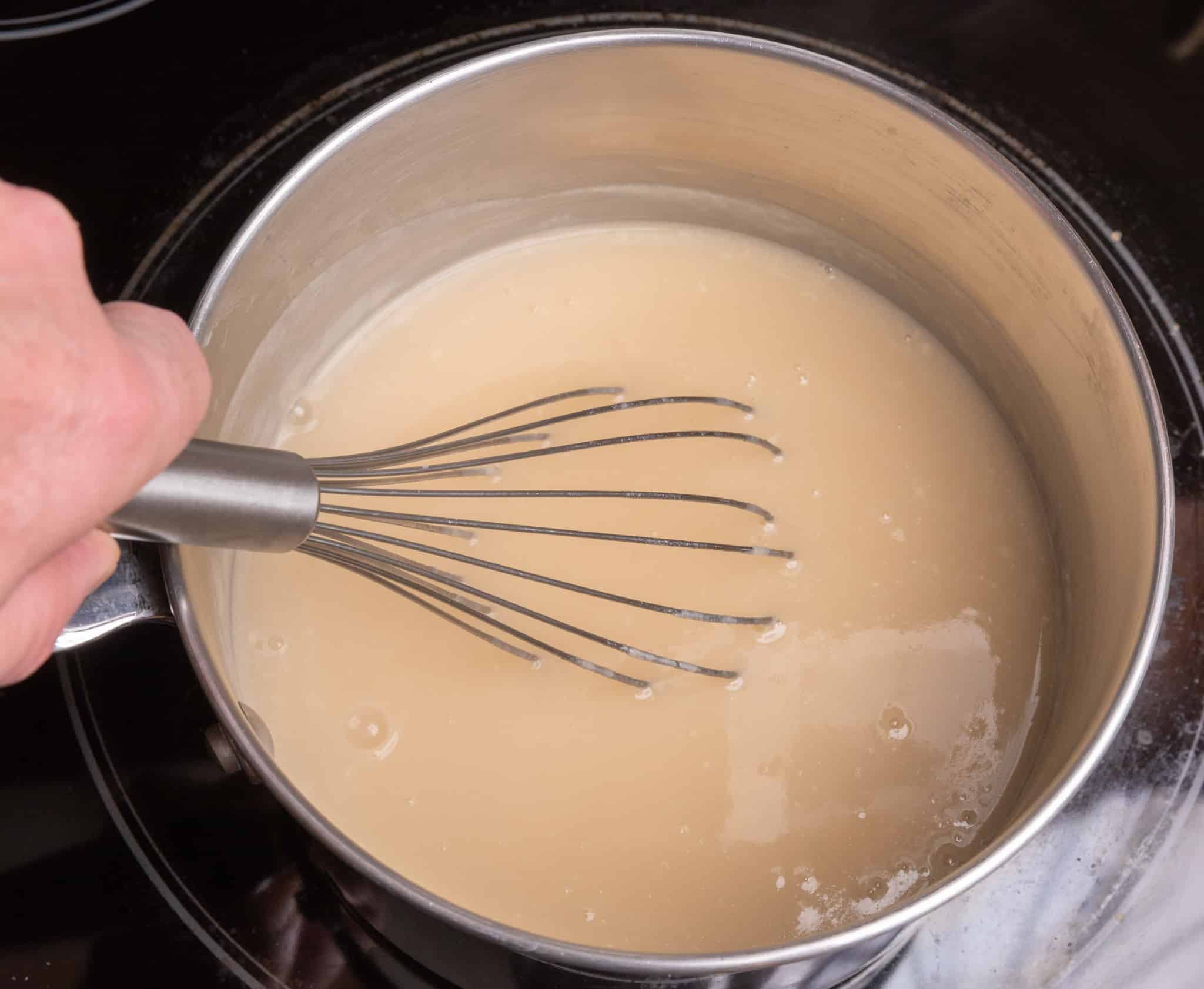 Add 1 cup of chicken broth to the roux and whisk until smooth. Add the remainder of the broth 1 cup at a time whisking until smooth between each cup. Remove the chicken veloute from the heat and reserve for later in the recipe.

Some recipes call for sprinkling the flour over the cooked mushroom, adding the broth, and then stirring over heat until the soup has thickened. I prefer to cook the roux in a separate pot and then add the broth to make a veloute. I like the added nutty-like flavor that comes from cooking the roux separately. The broth is also well incorporated with the flour and starting to thicken before adding it to the mushrooms. 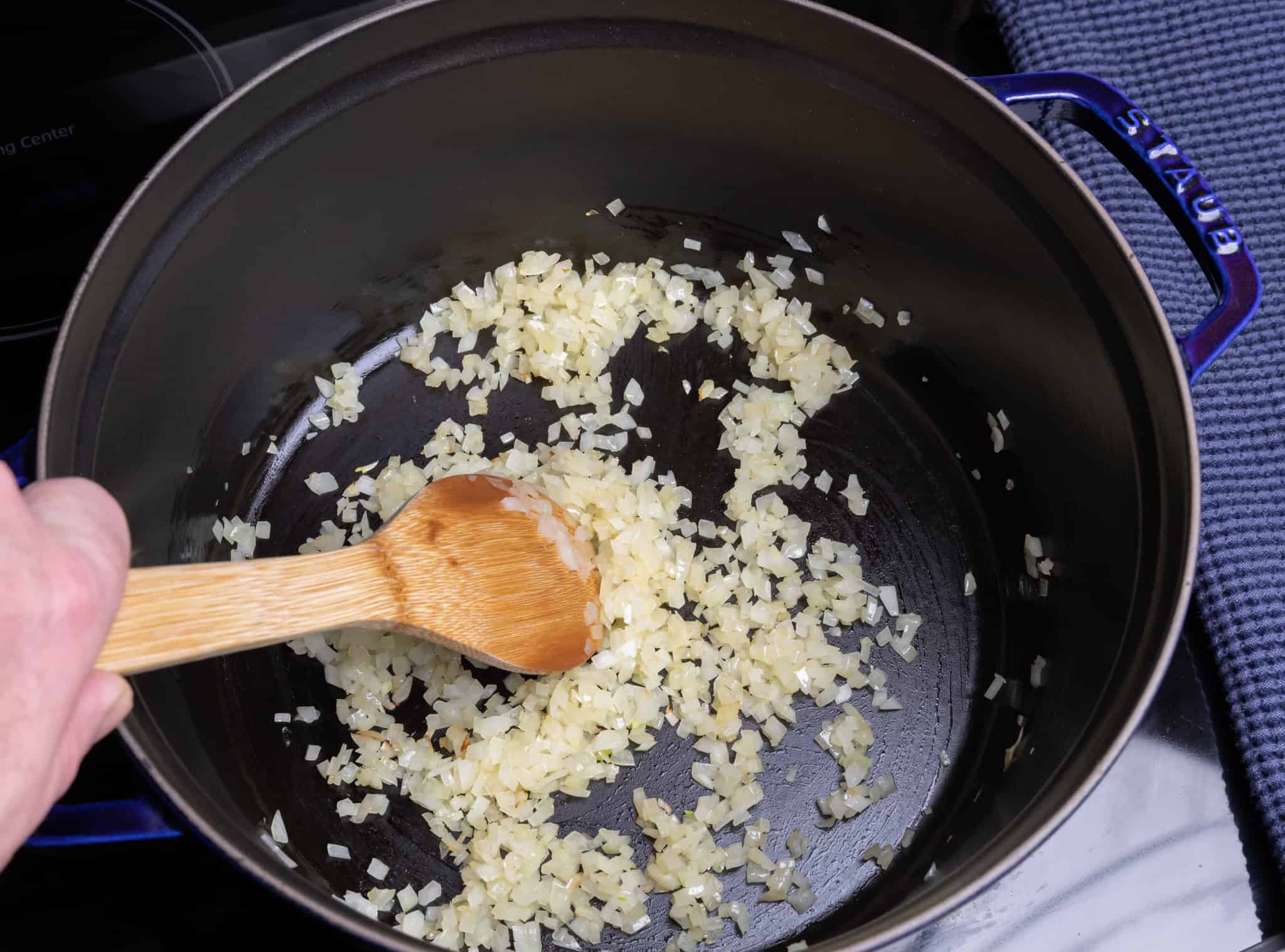 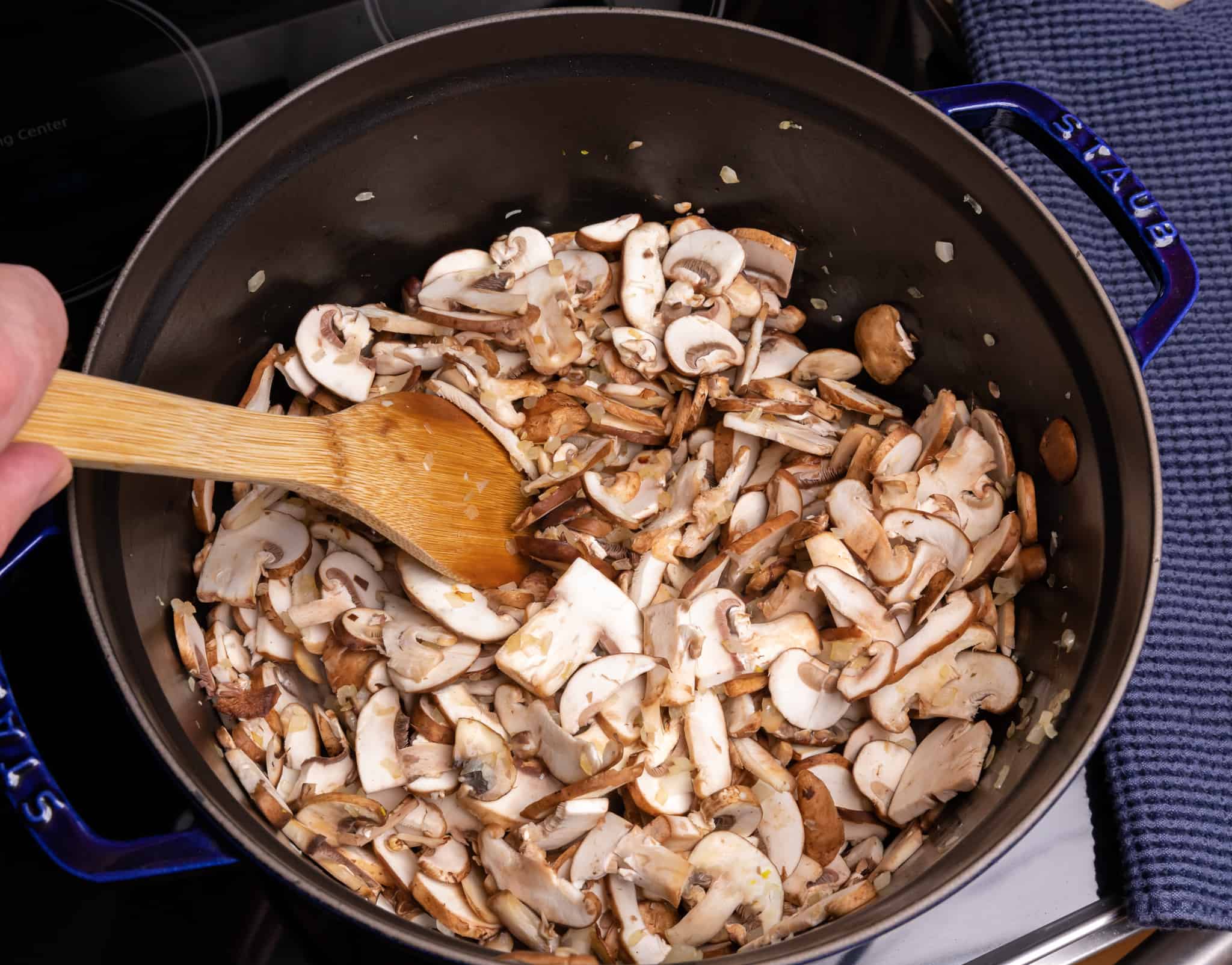 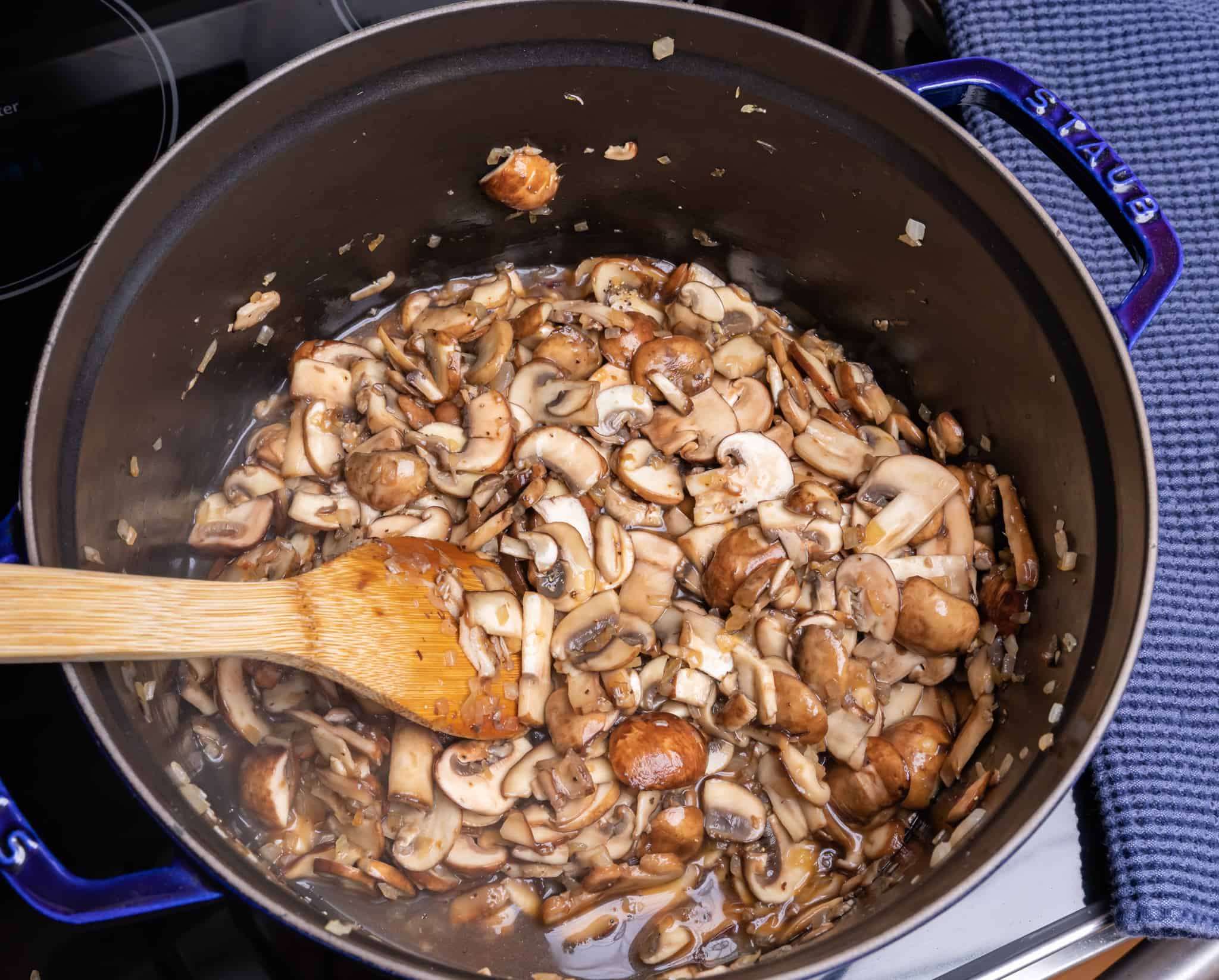 Stir in the sherry and reduce for 3 to 4 minutes, until the liquid has nearly evaporated. 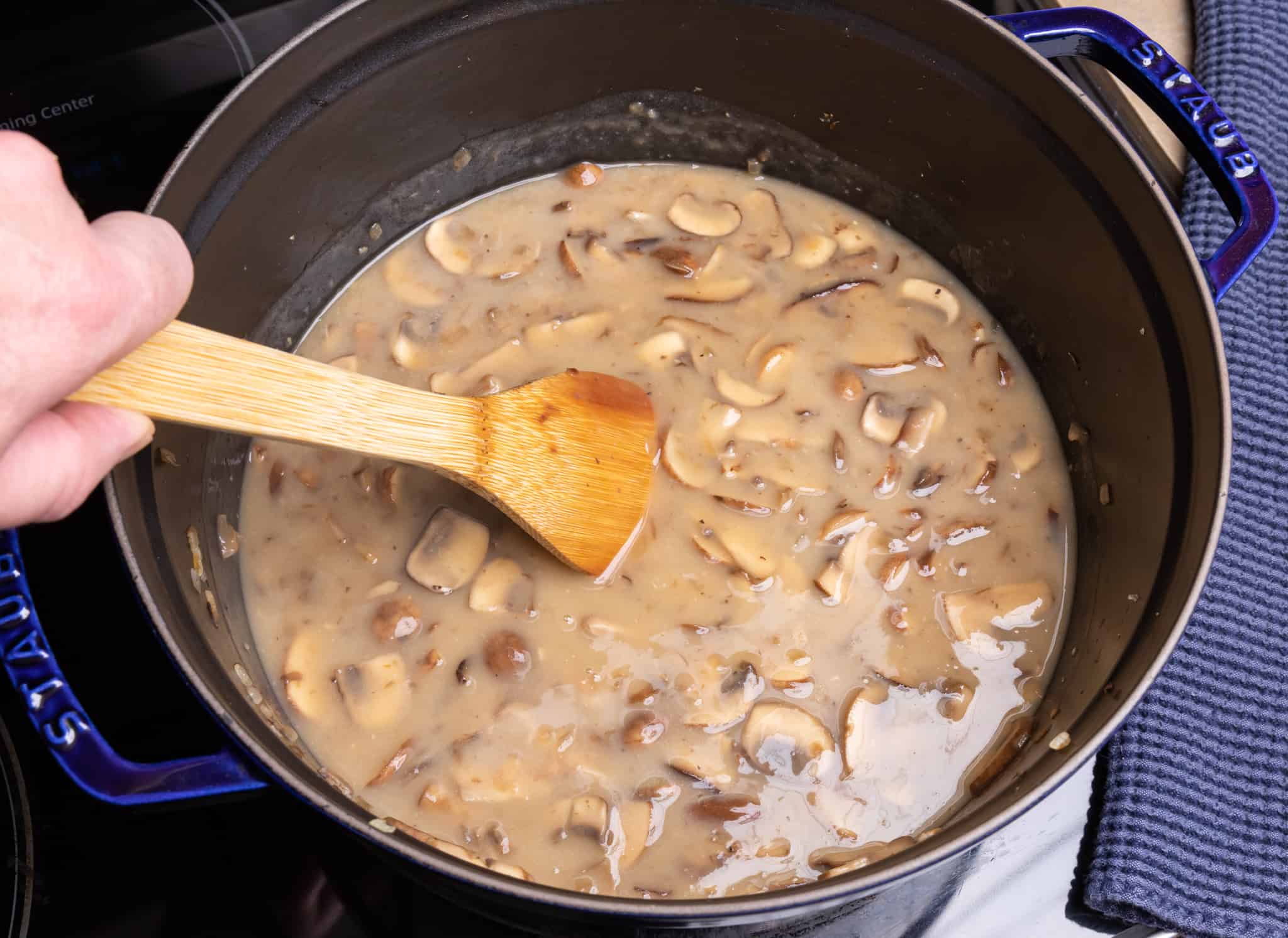 Add the reserved veloute sauce to the mushrooms and stir until combined. Simmer on low for 20 minutes until the soup has thickened, and any remaining starchy taste has been removed. 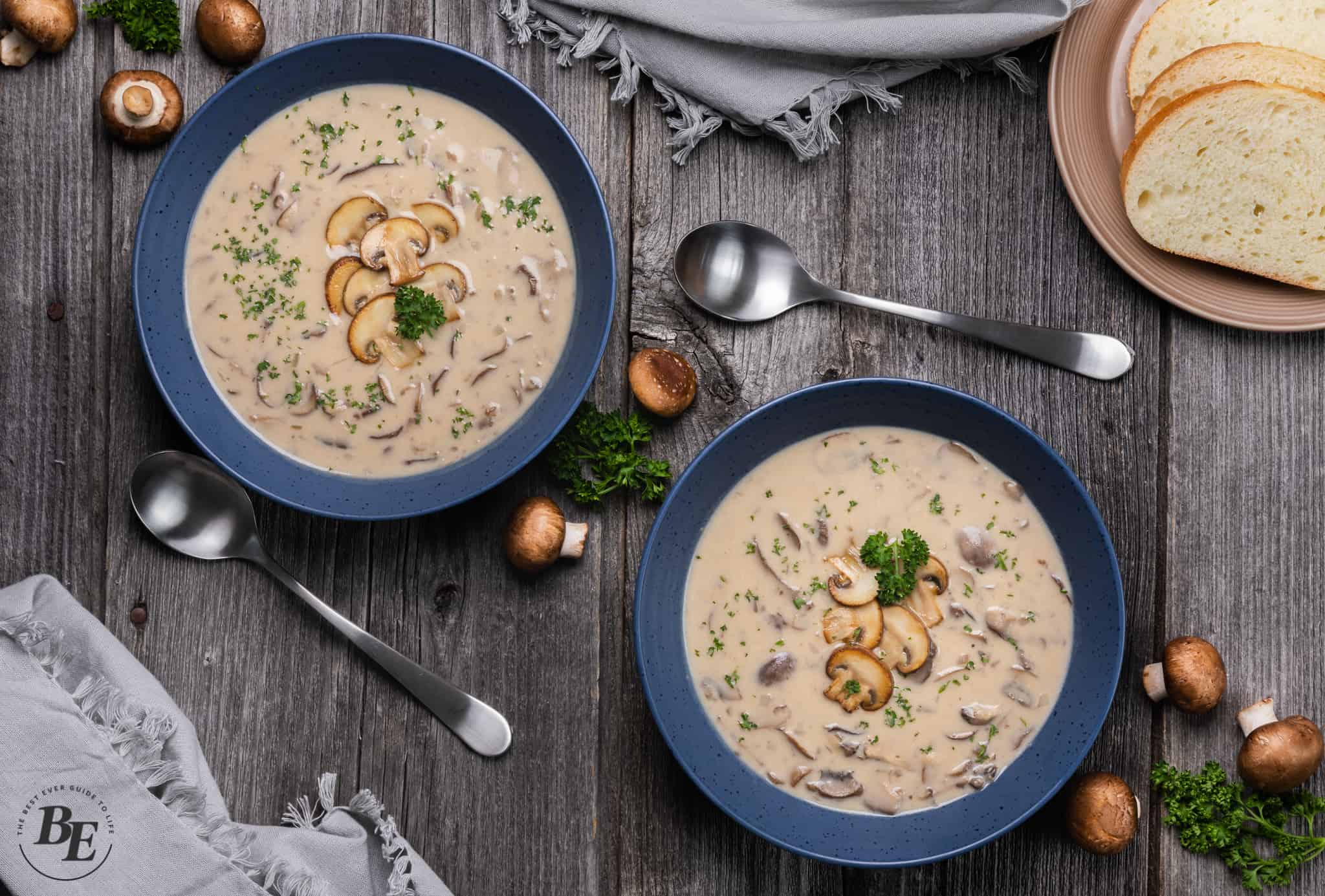 Stir in the cream and simmer on low for 5 minutes. Season to taste with salt and pepper. Serve and enjoy this delicious cream of mushroom soup as a starter for your next family dinner. Or makes for a great lunch served with a salad and your favorite bread. 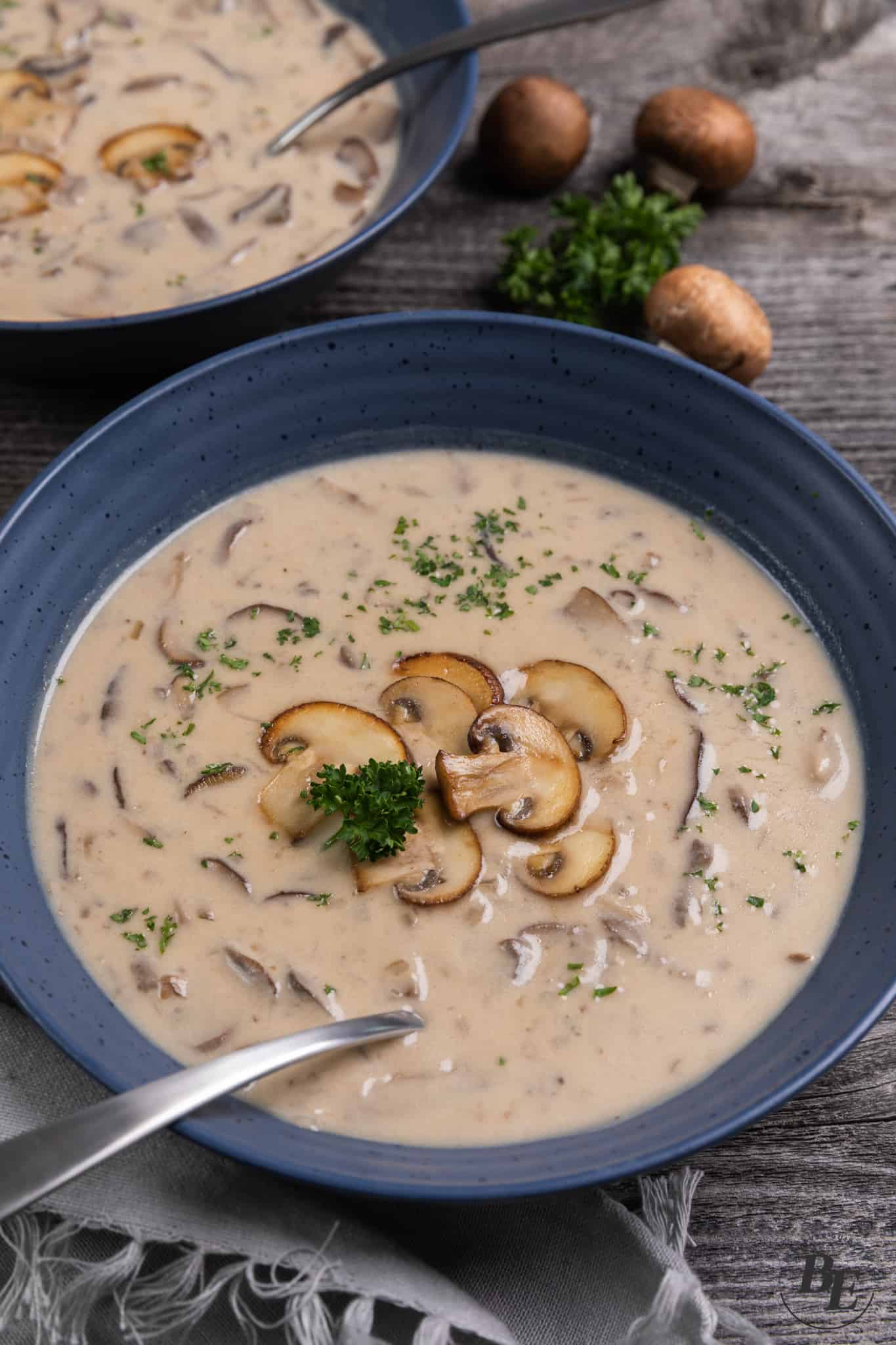 How to Store Cream of Mushroom Soup

Refrigerate: Allow the soup to cool completely before refrigerating. Pour the leftovers into a flat wide bottom container to aid in the cooling process. Do not allow the soup to sit at room temperature for more than a couple of hours. Refrigerate the soup in an airtight sealed container or freezer bag for 3-4 days.

Freezing the Soup: If you are planning on freezing the soup, omit the last step and do not add the cream. The cream has a tendency to separate when thawed after being frozen. Let the soup cool completely and transfer to an airtight container or freezer bag. Squeeze out all the air from the plastic bag or container and freeze for 2-3 months.

Thawing and Reheating the Soup: Thaw the soup overnight in the refrigerator. Place the thawed soup into a pot and reheat over low heat stirring frequently to avoid scorching. Once the soup is warm, add the cream and stir until well combined.